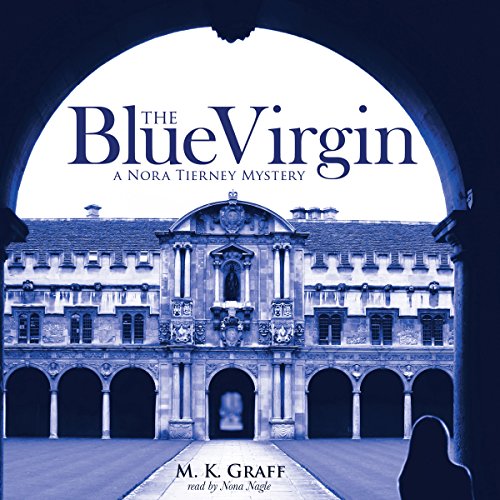 Despite a planned move, the mysterious death of photographer Bryn Wallace keeps American writer Nora Tierney glued to Oxford in order to clear her close friend, artist Val Rogan, who has been wrongfully accused of Bryn's murder. Or has she?

Nora quickly becomes embroiled in the murder investigation, much to the dismay of two men: Detective Inspector Declan Barnes, the senior on the case; and Simon Ramsey, the illustrator of Nora's children's book. Simon's efforts to save Nora from herself become increasingly frantic as Nora is forced to push her way into Declan's case, using her wits and her wiles to prove Val's innocence.

The first in a series of Nora Tierney mysteries based in the UK, The Blue Virgin is a compelling story of love and intrigue. Nothing, Nora learns, is what it seems, and even the most innocent of choices can lead to murder and revenge. Set in the ancient city of golden spires, the setting lends itself to mystery, as any Inspector Morse fan will agree. The novel is written in classic English style, complete with a cast of characters and chapter epigraphs that add to its literary feel.

" The Blue Virgin flows like a river, smooth but powerful, with small streams feeding into the story, adding to the depth and richness.... The mystery is solid, and Ms. Graff's knowledge of Oxford comes through in the details without ever slowing the pace." (Author Ellis Vidler)