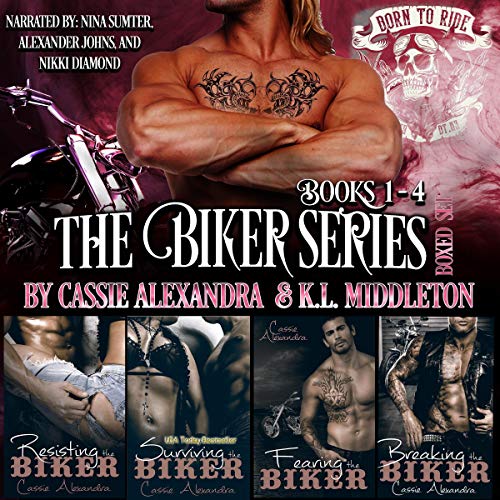 What readers are saying

"They need to make it into a movie. I would definitely watch" (Nikki T.)

Included in this boxed set are the first four books in the series:

These stories contains crude language, sexual situations, and violence. It is not suitable for readers under the age of 18. Please do not buy if any of this offends you. This is a work of fiction and is not meant to be a true depiction of a motorcycle club. It was written for entertainment only.

Twenty-one-year-old college student, Adriana Nikolas doesn't really know what to make of Raptor, the sexy biker who seems to be obsessed with getting into her pants. Hot or not, she knows from their first encounter that he's dangerous, both in and out of bed.

What Raptor wants, Raptor gets. Right now, he wants Adriana and will do whatever it takes to claim her as his woman. But, she keeps resisting, which isn't something that the Road Captain of the Gold Vipers is accustomed to. Arrogant, cocky, and stubborn, Raptor takes on the challenge, and in the meantime, gets much more than what he'd bargained for.

Meanwhile, Slammer, President of the Gold Vipers, seeks justice for the rape of his Old Lady's daughter.

After falling hard for Raptor, the sexy biker who pursued her with a vengeance, Adriana finds herself in a situation that could make-or-break their relationship.

Meanwhile, Raptor is stuck between a rock and a hard place after receiving some mind-blowing news.

In other news, Slammer, President of the Gold Vipers, seeks justice for the rape of his Old Lady's daughter.

Jordan Steele (The Judge) has been hired as a bodyguard for Jessica Winters, Slammer's new step-daughter. Security is usually not his thing, but he finds himself unable to refuse the offer after meeting her in person.

Jessica Winters wants nothing to do with The Judge or any other biker, for that matter, especially after being raped by one of the Devil's Rangers, three years before. When she learns that her life is in imminent danger, however, she reluctantly agrees and finds herself in the care of a man who makes her tremble in more ways than one.

Tank, the newly appointed President of the Gold Vipers, has one mission – to find the woman responsible for murdering a club member in cold blood. Female or not, he’s out for vengeance and will stop at nothing to get his hands on the killer.

After Raina’s two-year-old son is killed during a club war, she takes her revenge on the man she believes is responsible for his death. When she learns that the newest President of the Gold Vipers is now hell-bent on finding her, Raina makes sure that he gets exactly what he wants, and then some....