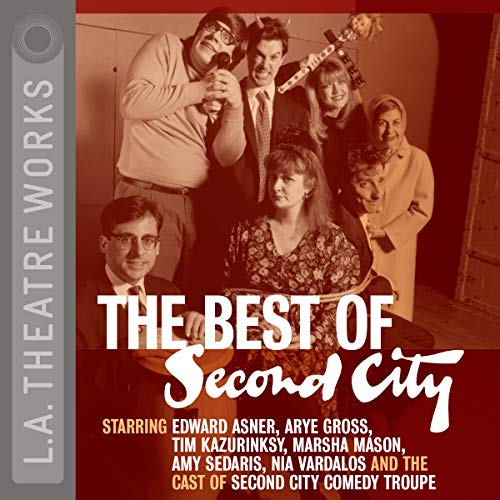 The Best of Second City, Volume 1

When was the last time you laughed so hard you thought your heart would explode? Isn't it time you relived that joyous experience? This audio offers more than four hours of improvisational comedy sketches from Chicago's foremost comedy troupe, Second City. Connoisseurs of comedy will appreciate the verbal magic tricks of the "improv" sketches, as well as the many levels of humorous human experience every piece investigates. Running the gamut of topics from catastrophic Christmases to homicidal history professors, from O.J. to the IRS, L.A. Theatre Works offers decades of Second City hilarity in one brilliant package.

Since 1959, Chicago's Second City improvisational comedy troupe has played a critical role in developing some of the most successful comedians in the United States and Canada. Comedians such as Alan Arkin, Joan Rivers, James Belushi, Bill Murray, Mike Myers, and Richard Kind, to name a few, have all performed with The Second City. Between 1991 and 1997, L.A. Theatre Works, in conjunction with Chicago Theatres on the Air, had the pleasure of producing a number of Second City performances featuring Stephen Colbert, Steve Carell, Amy Sedaris, Marsha Mason, Edward Asner and Paul Dinelo.

Colbert, Dinelo, and Sedaris went on to create the hit show Strangers with Candy for Comedy Central, and Amy's best-selling book, I Like You: Hospitality Under the Influence is both witty and hilarious. More recently, both Carell and Colbert have enjoyed immense success, beginning with their supporting roles on The Daily Show. Carell's show, The Office, is a hit on NBC, and his movies are box-office boffos. Colbert has spun his Daily Show character off into his own highly successful The Colbert Report.

Hear these budding young comedians in some of their most hilarious work before they became the stars they are today.