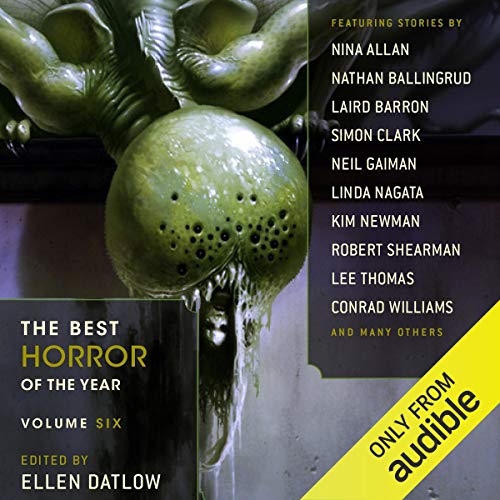 The Best Horror of the Year, Volume Six

This statement was true when H. P. Lovecraft first wrote it at the beginning of the twentieth century, and it remains true at the beginning of the twenty-first century. The only thing that has changed is what is unknown. With each passing year, science, technology, and the march of time shine light into the craggy corners of the universe, making the fears of an earlier generation seem quaint. But this light creates its own shadows. The Best Horror of the Year, edited by Ellen Datlow, chronicles these shifting shadows. It is a catalog of terror, fear, and unpleasantness as articulated by today's most challenging and exciting writers.

The best horror writers of today do the same thing that horror writers of a hundred years ago did. They tell good stories - stories that scare us. And when these writers tell really good stories that really scare us, Ellen Datlow notices. She's been noticing for more than a quarter century. For 21 years she coedited The Year's Best Fantasy and Horror, and for the last six years she's edited this series. In addition to this monumental cataloging of the best, she has edited hundreds of other horror anthologies and won numerous awards, including the Hugo, Bram Stoker, and World Fantasy awards. More than any other editor or critic, Ellen Datlow has charted the shadowy abyss of horror fiction.