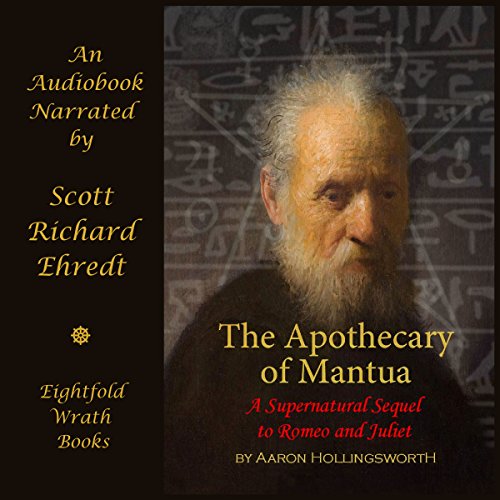 The Apothecary of Mantua: A Supernatural Sequel to Romeo and Juliet

The Apothecary of Mantua: A Supernatural Sequel to Romeo and Juliet

This is the story of a drug deal gone bad.

Having committed the crime of selling a potent poison to a desperate youth, a destitute apothecary must decide how to spend his ill-gained fortune. Resolving to start his career afresh, he flees to the city of Verona to set up a new shop of medicinal healing and alchemical discovery.

Plans go awry when he finds himself in the middle of a woeful tragedy he had unwittingly helped to cause. Can his knowledge of nature's secrets and the inspiration of a fairy queen help restore the six lives lost? Will his exploits go undetected by a hellbent inquisitor and a noble assassin? Or was the tragedy of Romeo and Juliet only the beginning of Verona's doom?

This sick-minded sequel is both travesty and tribute to Shakespeare's classic play. New characters are introduced as old ones are reenvisioned in a madcap escapade of murder, magic, mystery, man eating, and malicious mayhem. No flesh is safe from the eerie evil hidden in the minds of men, not even the flesh of the dead....