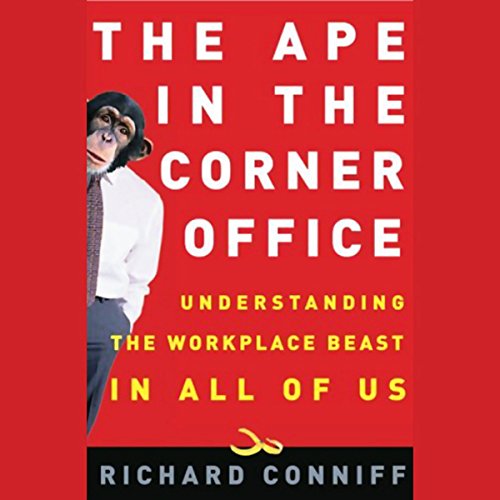 The Ape in the Corner Office

The Ape in the Corner Office

You're ambitious and want to get ahead, but what's the best way to do it? Become the biggest, baddest predator? The proverbial 800-pound gorilla? Or does nature teach you to be more subtle and sophisticated?

Richard Conniff, the acclaimed author of The Natural History of the Rich, has survived savage beasts in the workplace jungle, where he hooted and preened in the corner office as a publishing executive. He's also spent time studying how animals operate in the real jungles of the Amazon and the African bush.

What he shows in The Ape in the Corner Office is that nature built you to be nice. Doing favors, grooming coworkers with kind words, building coalitions, these tools for getting ahead come straight from the jungle. The stereotypical Darwinian hard-charger supposedly thinks only about accumulating resources. But highly effective apes know it's often smarter to give them away. That doesn't mean it's a peaceable kingdom out there, however. Conniff shows that you can become more effective by understanding how other species negotiate the tricky balance between conflict and cooperation.

Conniff quotes one biologist on a chimpanzee's obsession with rank: "His attempts to maintain and achieve alpha status are cunning, persistent, energetic, and time-consuming. They affect whom he travels with, whom he grooms, where he glances, how often he scratches, where he goes, what times he gets up in the morning." Sound familiar? It's the same behavior you can find written up in any issue of BusinessWeek or The Wall Street Journal.The Ape in the Corner Office connects with the day-to-day of the workplace because it helps explain what people are really concerned about: How come he got the wing chair with the gold trim? How can I survive as that big ape's subordinate without becoming a spineless yes-man? Why does being a lone wolf mean being a loser? And, yes, why is it that jerks seem to prosper, at least in the short run?