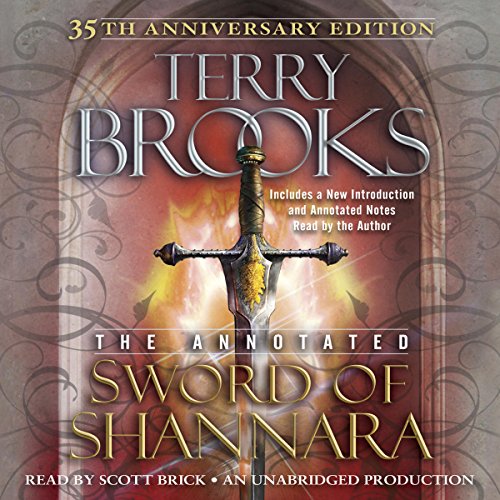 Thirty-five years ago, Terry Brooks brought to life a dazzling world in The Sword of Shannara. Nineteen more Shannara volumes would follow, making the series one of the most popular fantasy epics of all time. Now comes a fully annotated collector's edition of the novel that started it all - featuring never-before-shared insights into the classic tale and an all-new introduction by the New York Times best-selling author.

Long ago, wars ravaged the world. In peaceful Shady Vale, half-elfin Shea Ohmsford knows little of such troubles. Then the giant, forbidding Allanon reveals that the supposedly dead Warlock Lord is plotting to destroy everything in his wake. The sole weapon against this Power of Darkness is the Sword of Shannara, which can be used only by a true heir of Shannara. On Shea, last of the bloodline, rests the hope of all the races.

Soon a Skull Bearer, dread minion of a mighty evil, flies into the Vale, seeking to destroy Shea. To save his home, Shea must flee, drawing the Skull Bearer after him in menacing pursuit.

" The Sword of Shannara is an unforgettable and wildly entertaining epic, animated by Terry Brooks's cosmically generative imagination and storytelling joy. This was one of my favorite fictional worlds growing up, and I look forward to many return trips." (Karen Russell, New York Times best-selling author of Swamplandia!)

"Terry Brooks has been my constant companion over a lifetime of exploring my beloved fantasy genre. I say with all honesty I would not be writing epic fantasy today if not for Shannara. If Tolkien is the grandfather of modern fantasy, Terry Brooks is its favorite uncle." (Peter V. Brett, New York Times best-selling author of The Desert Spear)

"I can't even begin to count how many of Terry Brooks's books I've read (and reread) over the years. From Shannara to Landover, his work was a huge part of my childhood." (Patrick Rothfuss, New York Times best-selling author of The Name of the Wind)

The story tighly mirrors the story of Tolkien's Lord of the rings. Yet, the writing is incredibly bad. Important eventsbare flatly summarized, transitions between scenes are confusing, and the characters have just so much life and own thoughts that the story barely works. Sometimes, not even that is the case, and the characters act stupidly and/or out of character, I guess to make the story work or in a vain attempt to make a scene more dramatic.

I do not have the feeling that the author has a clear picture of the inner thoughts and desires of the characters. The mostly uninformative comments (called annotations) of the author where he often freely admits to copy other work or to use a stupid action of a character because that is "how it is done in epic fantasy novels" does the listening experience not better.

I guess I will have to admit that novel was written in a time where the author was one of the first to copy Tolkien, but it pains me that the author even after 30 does not talk about such writing mistakes in the annotations. This novel could be seens as the beginning of the Trash-Fantasy category, which afterwards vividly thrived.