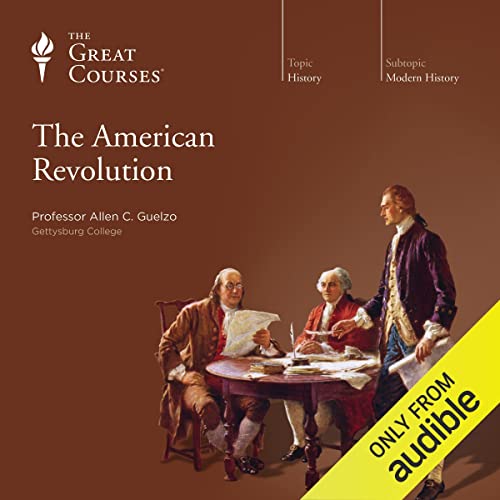 Why did 13 colonies believe they could defeat the most powerful nation on the planet? And how did they eventually manage such an impressive feat? Get the real story on the battle for American independence with Professor Guelzo's 24 gripping lectures.

With a focus on the war's strategy, military tactics, logistics, and most fascinating people, these lectures are a must own for anyone curious about the origins of the greatest nation in modern history. Told from the perspective of both sides in an intense, almost novelistic style that recreates the experience of the war's key battles and decisions, the lectures introduce you to an array of vivid personalities, including George Washington, Lord George Sackville-Germaine, Henry Knox, Sir William Howe, and Thomas Paine.

Professor Guelzo's approach gives the forces at work in the palace and in Parliament equal weight with those in play at the Continental Congress and among George Washington's inner circle. It's a perspective that reveals the very different ways in which the two nations saw both their economic relationship and the philosophical underpinnings of a government's relationship to its citizens. You'll learn what it was like to serve on either side of the conflict, how those sides were trained, and about the terrors of the battlefield. Rich in dramatic moments like this, these lectures offer a fresh appraisal of this seminal event in American history, offering the diverging views of two sides whose common heritage had yielded two very different outlooks.