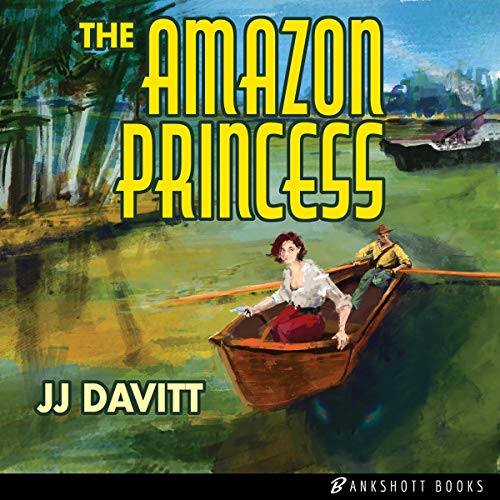 A gutsy dame, a surly smuggler, a deep and sinister river: If you enjoyed The African Queen and Raiders of the Lost Ark, you'll love this romantic-suspense novel set in the most eldritch corner of the Amazon Basin.

It's February of 1928 - late summer in the Amazon. Prudence McMarion, a film editor at Walter Disney's animation studio in Los Angeles, has taken a leave of absence to travel deep into the Amazon Rainforest with her best friend, Brazilian native Eleanor Martins, to make an independent movie in Eleanor's home village. Along the way, they meet members of the seedy, disreputable "expat community" there: A French doctor who's clearly not really French, a South African mercenary, and a surly riverboat captain who's pretty obviously a smuggler. All are on the lam. None are to be trusted. And when they get to the village, they learn that Eleanor's relatives have vanished, leaving behind only an empty canoe with tooth marks on it.

Shortly after their arrival, the strange dreams start. Then Eleanor disappears as well, and her disappearance touches off a chain of events that culminates in Prudence, in a straitjacket, being led down the pier to the riverboat to be transported to a brutal Brazilian insane asylum. But is she really crazy? Or does someone want her to think she is? Someone with a dark secret hidden away in a leafy fastness close to the village, about which some of Prudence's dreams came a little too close for comfort? And where is Eleanor? Dead or alive?

The answers to these questions will open the door to a past, and a future, full of secrets and mystery for both women - who, as it turns out, have known one another much longer than they realize.