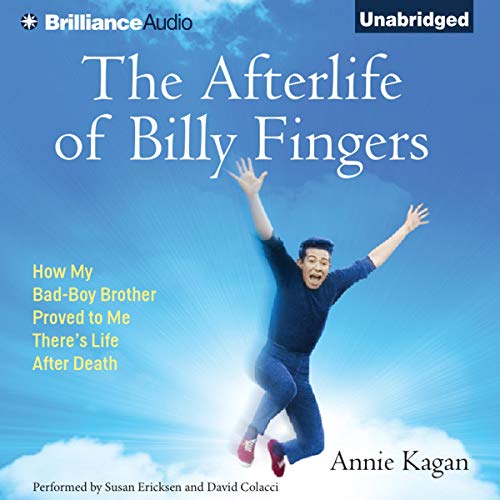 The Afterlife of Billy Fingers

Annie Kagan is not a medium or a psychic, she did not die and come back to life; in fact, when she was awakened by her deceased brother, she thought perhaps she had gone a little crazy.

In The Afterlife of Billy Fingers: How My Bad-Boy Brother Proved to Me There's Life After Death, Kagan shares the extraordinary story of her after death communications (ADC) with her brother Billy, who began speaking to her just weeks after his unexpected death.

One of the most detailed and profound ADC's ever recorded, Kagan's audiobook takes the listener beyond the near-death experience. Billy's vivid, real-time account of his ongoing journey through the mysteries of death will change the way you think about life, death, and your place in the Universe.

In his foreword, Dr. Raymond Moody, author of Life after Life, explains the phenomena of walkers between the worlds, known to us since ancient times, and says that Dr. Kagan's thought-provoking account is an excellent example.

Well......I don't know if this is true. Sounds like a new author, coming up with a way to deal with her brother's death & her guilt of always having been the favourite child, plus finally getting an idea for her first book. Can I return this silly book for a refund? Not worth the 10 bucks I paid for it.

I read the book before and loved it. So comforting and inspiring. Audiobook is well read and wonderful to listen to.

I love the book and heard at least 4 times!! It was mind opening and showed some new sights! I can really recommend this book!

i recommend it for everyone . for me as a spirit worker it was delightful