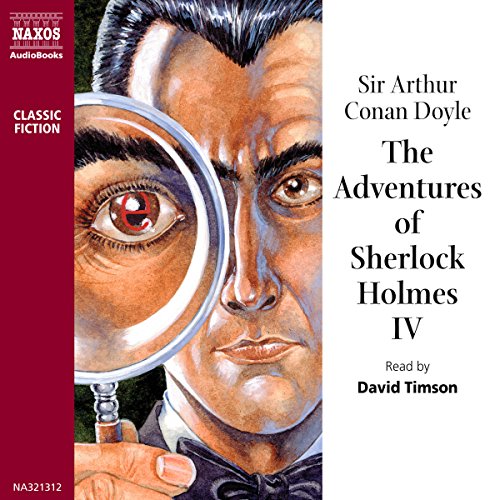 The Adventures of Sherlock Holmes IV

The Adventures of Sherlock Holmes IV

David Timson applies a cultured British accent and sparkly wry tones to four classic Sherlock Holmes stories: "A Case of Identity," "The Adventure of the Crooked Man," "The Naval Treaty," and "The Greek Interpreter." At times sly, at times somber, he shifts from one character to another with ease, changing accents and timbre as appropriate. Holmes stories have been interpreted many times in recent years - even George Takei, Captain Sulu from Star Trek, had a go at it. Timson is among the better narrators, giving one the feeling of having heard something authentic from gas-lit London.

Four more stories from the master detective. The mystery of the missing suitor is solved and Sherlock Holmes raises his whip: an Indian pot stands in the shadows of a Colonel's death; serious affairs of state and international diplomacy are threatened by a theft; and surely evil intent lies behind threats in a hidden house. The cool observations and swift action of Mr. Sherlock Holmes resolves all.