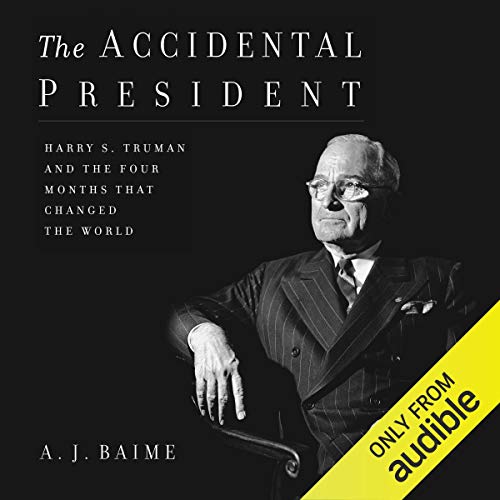 The dramatic, pulse-pounding story of Harry Truman's first four months in office, when this unlikely president had to take on Germany, Japan, Stalin, and the atomic bomb, with the fate of the world hanging in the balance.

Heroes are often defined as ordinary characters who get thrust into extraordinary circumstances and, through courage and a dash of luck, cement their places in history. Chosen as FDR's fourth-term vice president for his well-praised work ethic, good judgment, and lack of enemies, Harry S. Truman - a Midwesterner who had no college degree and had never had the money to buy his own home - was the prototypical ordinary man. That is, until he was shockingly thrust in over his head after FDR's sudden death.

During the climactic months of the Second World War, Truman had to play judge and jury, pulling America to the forefront of the global stage. The first four months of Truman's administration saw the founding of the United Nations, the fall of Berlin, victory at Okinawa, firebombings of Tokyo, the first atomic explosion, the Nazi surrender, the liberation of concentration camps, the mass starvation of Europe, the Potsdam Conference, the controversial decision to bomb Hiroshima and Nagasaki, the surrender of Imperial Japan, and, finally, the end of World War II and the rise of the Cold War. No other president had ever faced so much in such a short period of time.

Tightly focused, meticulously researched, rendered with vivid detail and narrative verve, The Accidental President escorts listeners into the situation room with Truman during this tumultuous, history-making 120 days, when the stakes were high and the challenge even higher. The result is narrative history of the highest order and a compelling look at a presidency with great relevance to our times.