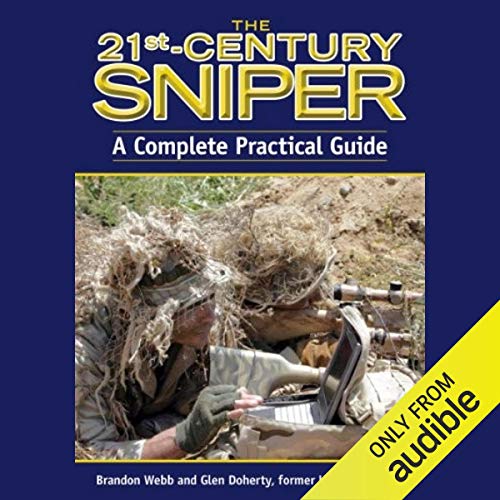 Allen O'Reilly expertly performs Brandon Webb and Glen Doherty's book The 21st-Century Sniper: A Complete Practical Guide. This volume really aims to unravel the mysteries behind of the military's deadliest combatants without falling to the misconceptions touted by films and video-games. While the sniper has played a part in every war for centuries now, not much has been written about the experience by those who have held this position in the military themselves.

With entries involving the long and storied history of the vital sharpshooting position, to a close look at the science of the scoped rifle and training needed to use one, this an crucial guide for understanding these artists of the battlefield.

The 21st century sniper is a mature, intelligent shooter who leverages technology to his deadly advantage. He has spent thousands of hours honing his skills. He is a master of concealment in all environments, from the mountains of Afghanistan to the crowded streets of Iraq. He is trained in science and left alone to create the unique art of the kill. To the sniper, the battlefield is like a painter’s blank canvas. It is his job to simultaneously utilize tools, training, and creativity to deliver devastating psychological impact upon the battlefield. And it is he alone who is left with the intimacy of the kill. A complete practical guide for any modern sniper, former Navy SEAL and military sniper Brandon Webb reveals the tips and basic training necessary to become an efficient marksman. Webb is an international authority on sniping, and after serving multiple missions in Iraq and Afghanistan, he ran the Navy SEAL sniper course, which is arguably the best sniper qualification course in the world. Including details on advanced sniper training for maritime, helicopter, and urban sniper operations, The 21st Century Sniper also touches on the latest research, development, testing, and evaluation of sniper weapons systems and optics. From trajectories and wind speed to camouflage and best vantage points and targets, Webb covers everything an expert sniper needs to know. This book is suitable for gun enthusiasts, outdoorsmen, the beginning sniper, and those with military backgrounds.