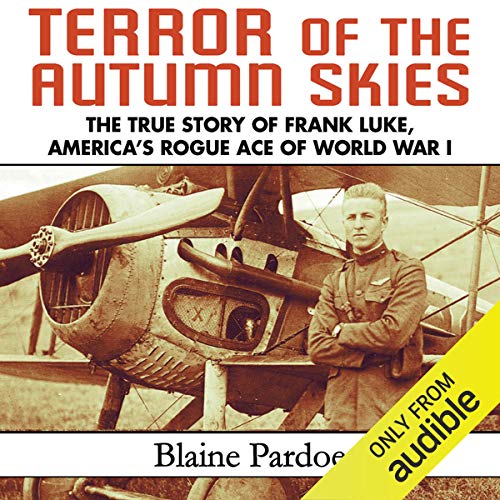 Terror of the Autumn Skies

Great War fighter pilot Frank Luke flew a scant 10 missions before his final stand behind enemy lines, but the brazen ace would go to his grave the second most victorious US Airman of World War I. Luke's two-week rampage through the western front skies capped a life marked by struggle and delinquency, from his beginnings as a miner and bare-knuckle boxer, to his near arrest for being AWOL on the penultimate day of his life. Husky-voiced performer John McClain captures Luke's fearless, tough-guy public demeanor, while nevertheless revealing the human sympathies of a young man with hopes, dreams, and an unyielding devotion to his family, comrades, and country.

Frank Luke, Jr., was an unlikely pilot. In the Great War, when fliers were still "knights of the air", Luke was an ungallant loner, a kid from Arizona who collected tarantulas, shot buzzards, and boxed miners. But during two torrid weeks in September 1918, he was the deadliest man on the Western Front. In only 10 missions, he destroyed 14 heavily defended German balloons and four airplanes, a rampage unequalled even by the dreaded von Richtofen, and the second highest American tally of the entire war. Cocksure and constantly reprimanded, Luke was actually under arrest on the day of his final flight, but he stole a plane to join the fatal action that won him the first Congressional Medal of Honor awarded to a pilot.

Blaine Pardoe retraces and refreshes Frank Luke's story through recently discovered correspondence. What emerges is a portrait of a life out of an "Old West" that was, by the late Teens, colliding with modernity. Frantic, short, and splendid, the life of Frank Luke, Jr. dramatizes the tragic intervention of an American spirit in the war that devastated Europe.