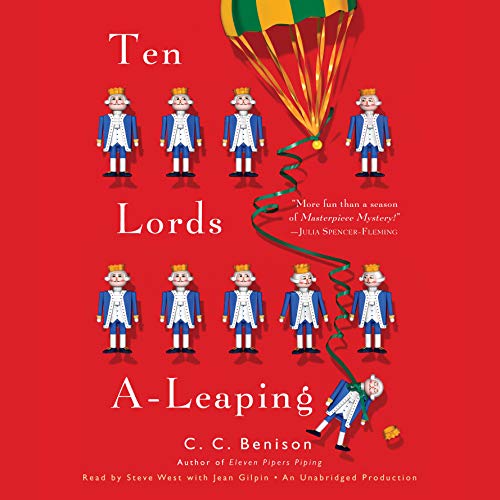 Although Father Tom Christmas serves his little church in enchanting Thornford Regis with a glad and faithful heart, he never expects to find himself skydiving to raise money for it. Nor, safely back on the ground, to see two of the other divers leap from the plane, then tangle in a midair punch-up and begin falling to the earth.

To say that there is tension between the men in question - Oliver, the 7th Marquess of Morborne, and his brother-in-law Hector, the 10th Earl of Fairhaven - would be an understatement. But the trouble among this ancient landed family really began a generation ago, when a marquess divorced his first spouse to marry his brother’s wife, fathering in his two marriages a viper’s nest of arrogant young aristocrats. Now they have all turned up for the show to witness this shocking event in the sky.

Thankfully the men land safely, but death will not be slighted. Much to Father Tom’s dismay, he later discovers Lord Morborne lying deceased on castle grounds. Rumors of bigamy, art forgeries, and upstairs/downstairs intrigue fly. So do whispers of unvicarly behavior between Tom and Oliver’s beautiful half-sister, Lady Lucinda. In fact, the vicar may be headed for a very hard landing of his own.

C. C. Benison gives a virtuoso performance in this gripping new puzzle, a compelling and wise holiday mystery with the irresistible allure of hot tea and warm scones on a cold winter’s day.