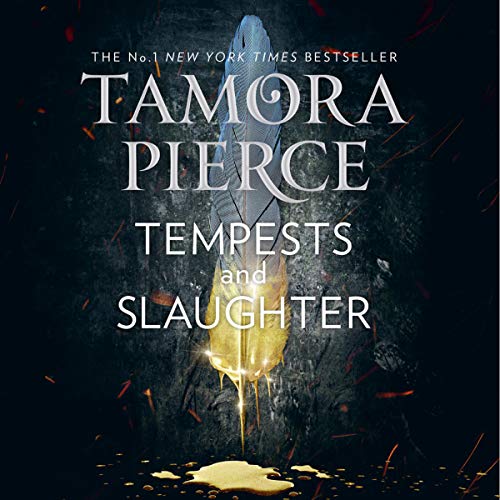 In Tempests and Slaughter, fans of Tamora Pierce will be rewarded with the never-before-told story of how Numair Salmalín came to Tortall. Newcomers will discover an unforgettable fantasy adventure where a kingdom's future rests on the shoulders of a young man with unimaginable gifts and a talent for making vicious enemies.

In the ancient halls of the Imperial University of Carthak, a young man has begun his journey to becoming one of most powerful mages the realm has ever known. Arram Draper is the youngest student in his class and has the Gift of unlimited potential for greatness . . . and of attracting danger.

At his side are his two best friends: clever Varice, a girl too often-overlooked, and Ozorne, the ‘leftover prince’ with secret ambitions. Together, these three forge a bond that will one day shape kingdoms.

But as Ozorne inches closer to the throne and Varice grows closer to Arram's heart, Arram realizes that one day – soon – he will have to decide where his loyalties truly lie.

"Tamora Pierce didn’t just blaze a trail. Her heroines cut a swath through the fantasy world with wit, strength, and savvy. Pierce is the real lioness, and we’re all just running to keep pace." (Leigh Bardugo, number one New York Times best-selling author)

"Tamora Pierce creates epic worlds populated by girls and women of bravery, heart, and strength. Her work inspired a generation of writers and continues to inspire us." (Holly Black, number one New York Times best-selling author)

"I take more comfort from and as great a pleasure in Tamora Pierce's Tortall novels as I do from Game of Thrones." (Washington Post)

Since I have learned to read in english, Tamora Pierce‘s books have accompanied me along the journey of learning the english language.

From my first, slow and heavily dictionary-accompanied read of „Alanna - The first Adventure“, through my second readthrough of the whole „The Song of the Lioness“ and „The Immortals“ series, I have loved and cherished these books. Now, 12 years after first reading one of these fantastic books, I have now found time to listen to Tempests and Slaughter.

As little as Numair‘s story captured me at first, as much did it hold me captive from a few minutes into the audiobook. I desperately hope that there will be more than one book to his story ❤️