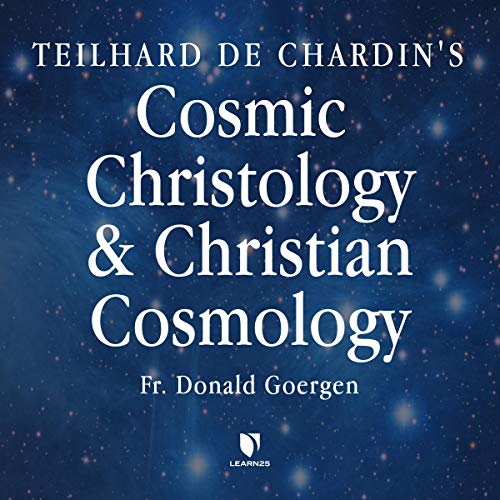 Journey through the life, thought, and works of Pierre Teilhard de Chardin.

One of the most celebrated spiritual minds of the 20th century, Teilhard de Chardin was both a respected scientist and a Jesuit priest. He combined an evolutionary worldview with his commitment to his Christian tradition and Catholic faith. A pioneer in the dialogue between religion and science, he remains a widely influential mystical voice.

Now, this new program guides you through Teilhard's timeless thought. Under the guidance of Teilhard expert Fr. Donald Goergen, you will explore Teilhard's works, including the essay collection Writings in Time of War, the spiritual classic The Divine Milieu, and the groundbreaking The Human Phenomenon. In doing so, you will examine such powerful themes as cosmology, Christology, Catholic spirituality, the mystery of suffering, and our understanding of God.

A restless spiritual seeker, Teilhard emphasized that the universe is unfinished, always on the move - and God, the Alpha and the Omega, is at its center. Teilhard will challenge you to think through the implications of God's creative action being made manifest in evolutionary terms. As you will discover, within this cosmic vision lies a new mysticism - the ability to see God in Christ and in all things.

With a remarkable capacity for synthesis, Teilhard invites you into his powerful, compelling vision of the universe. Join him on this mystical journey today.

This course is part of the Learn25 collection and includes a free PDF study guide.

“The finest professor with whom I have had the privilege to study, Don’s style is at once captivating and endearing.” (Fr. Raymond-Marie Bryce, O.P., Associate Pastor, Indiana University)

“Don Goergen has spent his life meditating on the meaning of Jesus and his mission...His work, whether spoken or written, is always holistic: intellectually satisfying, strengthening the heart, socially and pastorally sensitive.” (Vivian Boland OP, socius to the Master of the Order of Preachers)

“Studying Christology with Donald Goergen, OP almost two decades ago forever changed my understanding of Jesus of Nazareth, and continues to shape my prayer and preaching to this day. I am thrilled that Don's research and insight will now be available to a wider audience.” (Ann M. Garrido, Associate Professor of Homiletics, Aquinas Institute of Theology)

“Father Don Goergen, O.P., is a master of the spiritual life. He has not only studied Christian spirituality for many years but has put into practice in his adult life all of those key elements which enable one to grow in holiness....Let Don show you with the way with his wisdom and insights.” (Father Harry Byrne, O.P., Professor Emeritus, Aquinas Institute of Theology)

“Few have Fr. Don Goergen’s understanding of the elusive depths of Dominican spirituality. His living of our Dominican life shines through his body of published work on the Holy Spirit as well as his down to earth recorded lectures and retreats on Chardin and our own Eckhart.” (Mr. Joseph J. Komadina, O.P.)

“Fr. Goergen is a contemplative person, very much in tune with contemporary spirituality. He has carried many administrative responsibilities with steady competence. He possesses the Midwestern virtues of hard work and sober judgment, along with a ready humor.” (Benedict T. Viviano, O.P., biblical scholar)