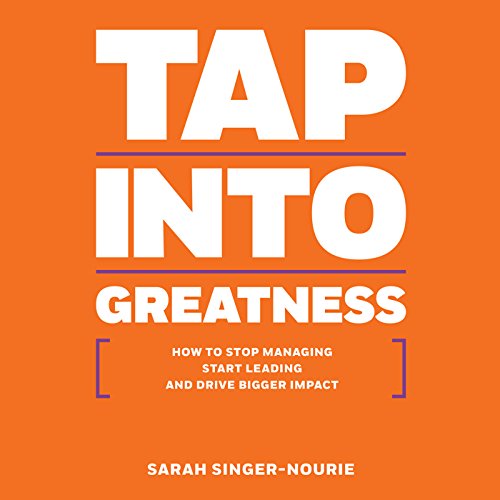 At some point, every single one of us has reached a point of frustration. A situation where we knew that we were having impact that was far less than what we were capable of. Large organizations are filled with smart people who have great ideas. Unfortunately, most of these people find themselves stymied in their ability to bring people to their full potential and ideas to fruition.

It doesn't have to be that way.

In Tap into Greatness, noted performance coach and educator Sarah Singer-Nourie reveals the key truths of having outsized impact, influence, and power. It turns out that most of us aren't leading. We're simply managing. We're getting things done, but we're not inspiring others to excel beyond what's expected. Great leaders know better. They know leadership isn't magic. It's not just something you're born with. Leadership is learnable.

In this engaging and hands-on book, Singer-Nourie provides tools that have been developed over the last 20 years in her work with leaders and teams in corporate America, Silicon Valley startups, schools, and nonprofit organizations. The methodology is based on how people actually learn rather than how most of us were taught in school. It leverages the insights of human motivation and the latest research in neuroscience to give leaders a road map for having impact.

Listeners who put the tools of Tap into Greatness into practice have immediate and often surprising results. They find themselves able to influence colleagues who were previously unmoved. They're able to inspire teammates to go above and beyond the call of duty. And they create teams that make better decisions even when the leader isn't in the room.

True Source Acknowledgement
Moving The Dial (Foreword by Blair Singer)
Chapter 0: Let's Go
Chapter 1: The Third Who
Chapter 2: WIIFM, The Everpresent Guide
Chapter 3: Your Process
Chapter 4: Your Options
Chapter 5: Impact Is All You
Chapter 6: Setting Yourself Up
Chapter 7: Coaching Them to Impact
Chapter 8: Playing Bigger
Chapter 9: State
Chapter 10: VAK
Chapter 11: More Power Than You Know
Chapter 12: The Three Ingredients
Chapter 13: Pyramid of Perspective
Chapter 14: Making It Stick
Chapter 15: Above the Line
Chapter 16: The Beginning
Chapter Resources
Acknowledgements
A Bit About Me