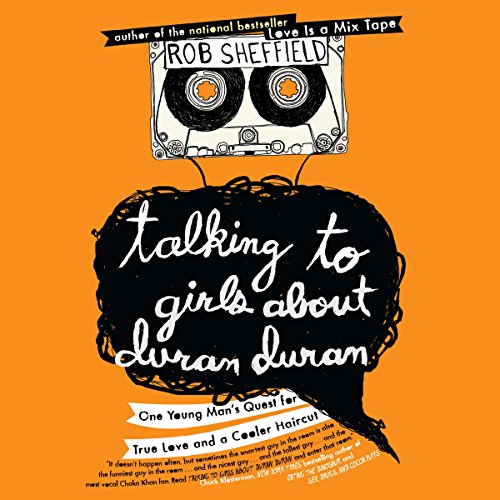 Talking to Girls About Duran Duran

Talking to Girls About Duran Duran

Anybody who likes reading about music knows Rob Sheffield. A music journalist for more than 20 years, Sheffield's pop culture musings have consistently been some of the funniest rays of sunshine radiating from every issue of Rolling Stone. His first book, Love Is a Mix Tape, rocketed into best seller territory, and this second effort will follow easily on the heels of its predecessor. Narrating Sheffield's rocky rock and roll journey to the heart of his ‘80s adolescence is Scott Shepard, who stays in step from start to finish.

Sheffield emphasizes that he is hardly a good singer, and Shepard dutifully renders the very many bits of lyrics in the fine tradition of half-speaking-half-singing dudes who argue about music history in bars. Everything Sheffield writes is hilarious, from classifying his mopey Morrissey days to listing his top favorite songs released on ‘cassingle’. Shepard delivers these rapid-fire manifestoes to all that is good and shameful in the ‘80s with the speculatory gusto that they deserve. Any one of the short and mostly chronological chapters, each devoted to memories evoked by a particular song, will feel familiar. After all, who among us does not have something filed away under Tone Loc or Def Leppard, Prince or The Replacements? You will unavoidably succumb to Sheffield’s analysis of the mystical powers of Duran Duran.

Shepard plays to all of Sheffield's various moods. Imagine every character's best rant from the two classic record store films Empire Records and High Fidelity, and then throw in the occasional Irish brogue for when Sheffield is talking about his family. The improbable love child of Henry Rollins and Molly Ringwald, Sheffield's take on the defining milestones of his youth is nothing short of majestic. Scott Shepard does a top-notch job of narrating the voice of a generation. Megan Volpert

The author of the national best seller Love Is a Mix Tape returns, with a different - but equally personal and equally universal - spin on music as memory. Now, in Talking to Girls About Duran Duran, Sheffield shares the soundtrack to his '80s adolescence.

When he turned 13 in 1980, Rob Sheffield had a lot to learn about women, love, music, and himself, and in Talking to Girls About Duran Duran we get a glimpse into his transformation from pasty, geeky "hermit boy" into a young man with his first girlfriend, his first apartment, and a sense of the world. These were the years of MTV and John Hughes movies; the era of big dreams and bigger shoulder pads; and, like any all-American boy, this one was searching for true love and maybe a cooler haircut.

It's all here: Inept flirtations. Dumb crushes. Deplorable fashion choices. Members Only jackets. Girls, every last one of whom seems to be madly in love with the bassist of Duran Duran.

Sheffield's coming-of-age story is one that we all know, with a playlist that any child of the eighties or anyone who just loves music will sing along with. These songs - and Sheffield's writing - will remind readers of that first kiss, that first car, and the moments that shaped their lives.