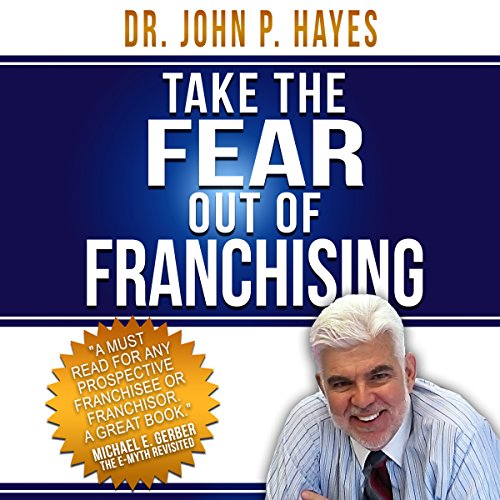 Take the Fear out of Franchising

Michael E. Gerber, author of the number-one most successful business book ever, The E-Myth, calls Take the Fear out of Franchising a "great book" that is "a must for any prospective franchisee or franchisor." Written by one of the world's foremost authorities on franchising, Dr. John P. Hayes, Take the Fear out of Franchising gets right to the nub of what's really important about buying, owning, and operating a franchise. Many people who consider buying a franchise never do because they get stuck in the process. That's fear! Sadly, people often get stuck over points of little or no consequence, says Dr. Hayes, and that's because they fall into the trap of investigating franchising as an industry. He says that process forces people to concentrate on the wrong points of information and it is mostly a waste of time. It creates more fear and ultimately immobilizes people. Dr. Hayes introduces listeners to five franchise tenets that explain why franchising works. He points out that while franchising is a fabulous methodology that has created countless millionaires, it's not foolproof, and it will not work for everyone. He then shows listeners how to know if franchising will work for them, and he teaches listeners how to investigate franchise opportunities by looking at the only data that really matters! Franchise executive Joe Caruso says Take the Fear out of Franchising is a "serious guide" to selecting a franchise. Tony Foley, vice president of Global Sales for United Franchise Group, says the book is a "step-by-step realistic guide on how to make one of the most important decisions of your life." And Joe Mancuso, founder of CEO Clubs International, says, "Rather than fear franchising, just read the book." Dr. Hayes is the Titus Chair for Franchise Leadership at Palm Beach Atlantic University in West Palm Beach, Florida.