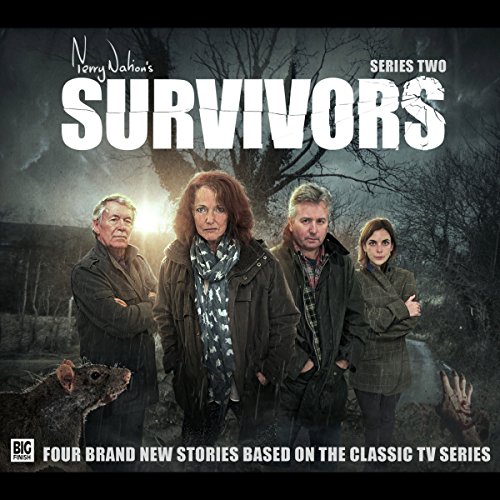 It begins with just a few people falling ill. Another flu virus that spreads around the globe. And then the reports begin that people are dying....

When most of the world's population is wiped out, a handful of survivors are left to pick up the pieces. Cities become graveyards. Technology becomes largely obsolete. Mankind must start again.

1: 'Dark Rain' by Ken Bentley. Introducing Tim Treloar as Russell, and Bernard Holley as Ridley. Months after the plague, storms batter the country. As Abby resumes the search for her son, Jackie and Daniel fight for their lives.

2: 'Mother's Courage by Louise Jameson. Introducing Fiona Sheehan as Molly. The search for Peter leads to Aberystwyth and a community of women who have cut themselves off from the outside world. But what appears to be a safe haven could be nothing of the sort.

3: 'The Hunted' by Ken Bentley. Introducing Tim Bentinck as Irvin Warner. Greg, Daniel and Russell need the help of survivalist Irvin Warner, who is hiding out in the Brecon Beacons. But predators are roaming in the barren countryside, too....

4: 'Savages' by Matt Fitton. Wounded, split apart and fighting for their lives, the survivors discover that survival isn't everything.

Note: Survivors contains adult material and is not suitable for younger listeners.