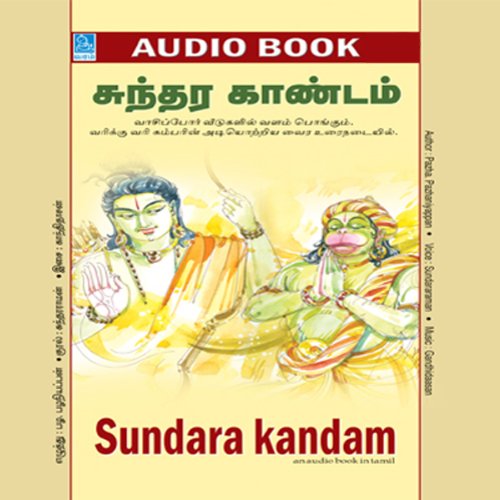 An audiobook in Tamil.

The Sundara kandam has a value of its own. The essence of the entire Ramayana has been encapsulated in the Sundarakandam. It is the story of Sita and Hanuman's bhakti.

Hanuman goes to Sri Lanka, meets Sita in the Asokavana, comforts her, and gives her the courage to be tenacious. After this meeting he goes to the palace of Ravana and tries to dissuade him from his chosen course of action, by telling him about Rama's prowess. When all his persuasion fails, he sets fire to Sri Lanka by means of his tail, which Ravana has set fire to. He thus rids Sri Lanka of some of its evil-doers. When you realise that all of this was achieved by the simple power of his faith in Rama's name, there is a natural onrush of faith in the name and the belief that all troubles vanish with its repetition.

It may not be possible for everyone to read and understand Kamban's version of the Ramayana. But the same beautiful effect has been achieved by Pazha. Pazhaniappan's simple but sweet rendition of the Sundara Kandam. It is certain to invoke feelings of faith, unalloyed happiness, and peace.

This audiobook offers another attraction. It also contains a short exposition on the benefits of reading Sundara Kandam and the method of reading it. Listen to this wonderful tale of bakthi and sacrifice.