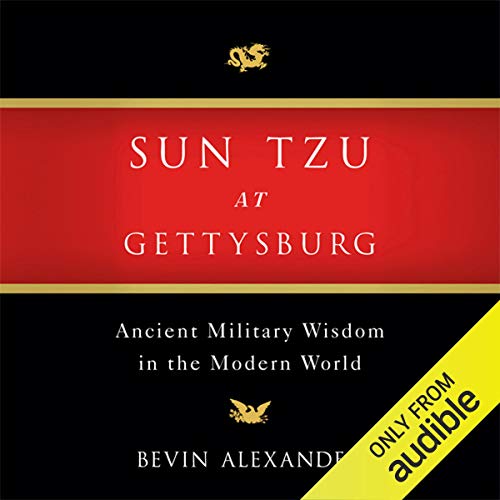 Military history audiobooks call for extra special attention: the bloody manoeuvres and counterattacks need to be followed step-by-step otherwise the thread of action is easily lost. Sun Tzu at Gettysburg comes with its own downloadable maps but thanks to Edoardo Ballerini's matchlessly clear reading they're barely necessary. It's an important point: in applying Sun Tzu's maxims to decisive battles of the past, author Bevin Alexander puts those battles under a microscope and Ballerini's measured delivery ensures the listener knows where he or she stands.

Sun Tzu at Gettysburg plays the "what if?" game of historical conjecture, and plays it well. Military wisdom that's over 2,000 years old is if nothing else a fresh angle on famous episodes in war, and if some of Alexander's findings seem to be more due to common sense that ancient Chinese wisdom, he has an un-showy persuasiveness that makes for an entertaining listen. Chapters range from the British defeat at the hands of American colonists through the Napoleonic and two World Wars to the North Korean War. Each chapter is peppered with references to what would Sun Tzu do ("The situation called for an intense application of a Sun Tzu axiom"). This approach also brings into relief other aspects, such as the difference between orthodox "cheng" and unorthodox "chi" strategies: according to Alexander, Stonewall Jackson used both in his manoeuvres against the Union.

Sometimes there's a hint of smugness to hindsight ("Rommel was wrong of course.") but Alexander's approach does highlight mistakes and how they happened. His chapter on the liberation of France in 1944 is especially illuminating, showing how Eisenhower, attempting to accommodate the interests of both the British and Americans, hobbled Patton in favour of Montgomery and led to disastrous consequences and arguments for years to come. "The allies," writes Alexander, "won the war in the wrong way." His clever application of Sun Tzu shows why that happened and, as Ballerini carefully adds up each word one after the other, the logic of his argument is self-evident. —Dafydd Phillips

Ten major battles or campaigns that could have been won by using the principles of The Art of War.

Imagine the impact on world history if Robert E. Lee had listened to General Longstreet at Gettysburg and withdrawn to higher ground instead of sending Pickett uphill against the entrenched Union line. Or if Napolon, at Waterloo, had avoided mistakes he'd never made before. The advice that would have changed the outcome of these crucial battles is found in a book on strategy written centuries before Christ was born.

Lee, Napoleon, and Adolf Hitler never read Sun Tzu's The Art of War; the book only became widely available in the West in the mid-20th century. But as Bevin Alexander shows, Sun Tzu's maxims often boil down to common sense, in a particularly pure and clear form. The lessons of contemporary military practice, or their own experience, might have guided these commanders to success. It is stunning to see, however, the degree to which the precepts laid down 2,400 years ago apply to warfare of the modern era.