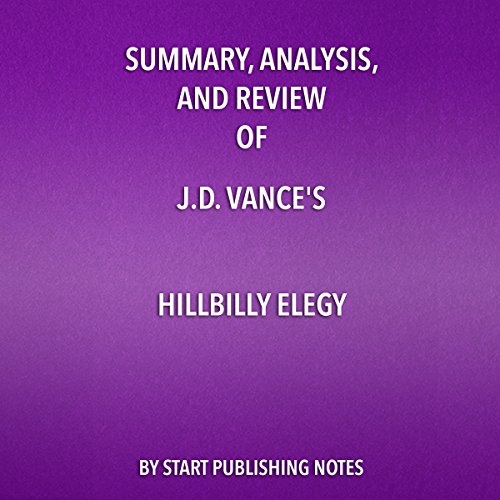 Please note: This is a key takeaway and analysis of the book, and not the original book.

Start Publishing Notes' Summary, Analysis, and Review of J.D. Vance's Hillbilly Elegy: A Memoir of a Family and a Culture in Crisis includes:

J.D. Vance's Hillbilly Elegy is a memoir about his life growing up in Ohio as the child of a working-class family with roots in Appalachia. Vance uses his experiences in a dysfunctional family to talk about the problems with what he calls hillbilly culture. He says that hillbilly culture is mired in laziness, drug use, and learned helplessness. Hillbillies claim to be committed to hard work, but Vance believes they actually refuse to work at available jobs, miring them in poverty. He argues that hillbillies must recommit to institutions like the family and the church in order to escape poverty.

Vance's grandparents, Jim Vance and Bonnie Blanton, were born in the town of Jackson in southeast Kentucky. They left in the 1940s when Bonnie, or Mamaw, became pregnant at 14. They moved to Middletown, Ohio, where Jim, or Pawpaw, worked in the steel mill. Their first child, that led them to leave Appalachia, was stillborn. Eventually, though, the family had three children, including a middle daughter, Bev, who became J.D. Vance's mother.