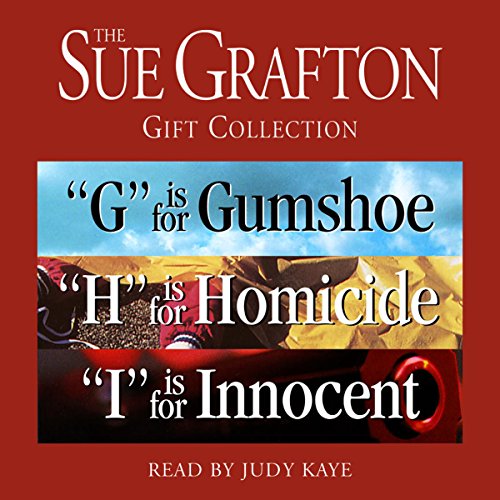 Here together for the first time in audio, Santa Teresa P.I. Kinsey Millhone is still on the case.

"G" Is for Gumshoe

Kinsey Millhone's 33 birthday brings about final renovations to her apartment, a new case, and the top slot on Tyrone Patty's hit list. Obviously, it would turn out to be a birthday to remember.

"H" Is for Homicide

To the cops, the death of claims adjuster Parnell Perkins looked like a robbery gone sour; to Kinsey Millhone, it looks strangely suspicious. As the evidence leads Kinsey to insurance scammer Bibianna Diaz, she must race to get to her before Bibianna's spurned and violent suitor, Raymond Maldonado, does.

"I" Is for Innocent

Kenneth Voight thought that justice had not been served when David Barney was acquitted in the shooting death of Voight's ex-wife, Isabelle. Five years later, Voight is the plaintiff in a civil suit in which Barney stands accused of Isabelle's wrongful death. When Voight hires Kinsey to gather the necessary damning evidence, a simple civil case becomes a deadly hunt for someone who once got away with murder - and may again.