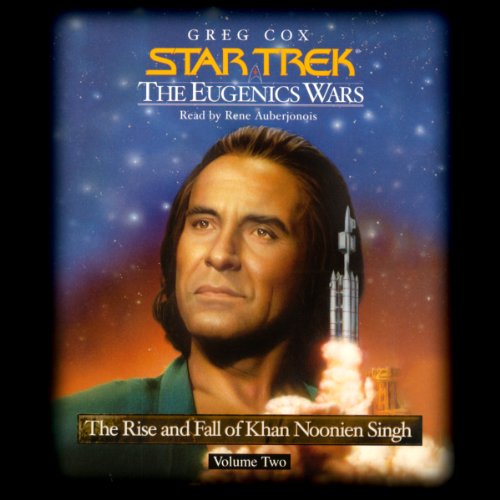 Many unanswered questions remain about the terrible Eugenics Wars that raged on Earth during the 1990s, an apocalyptic conflict that brought civilization to the brink of a new dark age. Centuries later, as Capt. James T. Kirk and the crew of the Starship Enterprise are forced to defend a colony of genetically enhanced humans against Klingon aggression and sabotage, Kirk must probe deeper into the past - and into the glory days of one of the greatest adversaries he has ever faced.

1992. Almost 20 years ago, Gary Seven and Roberta Lincoln, undercover operatives for an unknown alien civilization, failed to prevent the Chrysalis Project from creating an entire generation of supermen and women. Now the children of Chrysalis are adults, and rapidly demonstrating that superior abilities spawn superior ambition.

Perhaps the most formidable of this new breed of supermen is the charismatic Khan Noonien Singh. Head of a vast global conspiracy, Khan's power stretches across a quarter of the planet. Khan dreams of leading his fellow superhumans to complete and total domination of the world.

But several of his gene-engineered brothers and sisters have equally grandiose visions for the future, visions that recognize no one but themselves as supreme ruler. Gary Seven and Roberta watch in horror as the children of Chrysalis wage a covert war against one another, threatening the safety of millions and the future of the entire world!