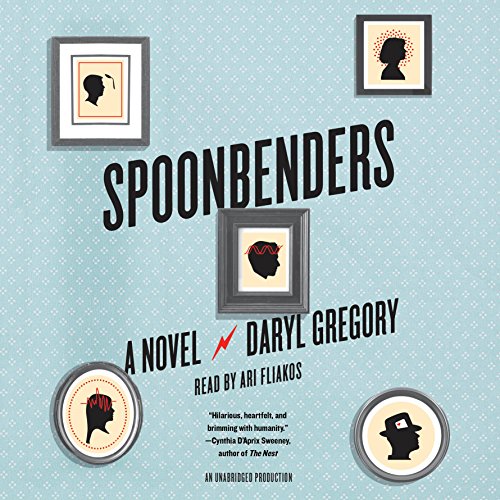 I admit it - in my mind, Ari Fliakos can do no wrong. After listening to him perform The Nix in 2016 I knew I was completely obsessed with his voice. Enter his latest endeavor, Spoonbenders by Daryl Gregory - a story about a family of psychics - and I knew I had to give it a listen. Spoonbenders follows The Incredible Telemachus family, a family of psychics (well, some of them at least) who in their heyday wowed audiences with feats of telekinesis, mind reading, and the ability to predict the future. But after one fateful and career-ruining television appearance, the future of this family became anything but predictable. Sprinkle in secret governmental agencies, a Chicago mob, and a teenage boy discovering, um, himself, and you have a surprisingly relatable, genuine, and hilarious multi-generational saga. —Laura, Audible Editor

Teddy Telemachus is a charming con man with a gift for sleight of hand and some shady underground associates. In need of cash, he tricks his way into a classified government study about telekinesis and its possible role in intelligence gathering. There he meets Maureen McKinnon, and it's not just her piercing blue eyes that leave Teddy forever charmed but her mind - Maureen is a genuine psychic of immense and mysterious power. After a whirlwind courtship, they marry, have three gifted children, and become the Amazing Telemachus Family, performing astounding feats across the country. Irene is a human lie detector. Frankie can move objects with his mind. And Buddy, the youngest, can see the future. Then one night tragedy leaves the family shattered.

Decades later the Telemachuses are not so amazing. Irene is a single mom whose ear for truth makes it hard to hold down a job, much less hold together a relationship. Frankie's in serious debt to his dad's old mob associates. Buddy has completely withdrawn into himself and inexplicably begun digging a hole in the backyard. To make matters worse, the CIA has come knocking, looking to see if there's any magic left in the Telemachus clan. And there is: Irene's son Matty has just had his first out-of-body experience. But he hasn't told anyone, even though his newfound talent might just be what his family needs to save themselves - if it doesn't tear them apart in the process.

Harnessing the imaginative powers that have made him a master storyteller, Daryl Gregory delivers a stunning, laugh-out-loud new novel about a family of gifted dreamers and the invisible forces that bind us all.

"Hilarious, heartfelt and brimming with humanity." (Cynthia D'Aprix Sweeney, author of The Nest)
"Masterful...gracefully balances the outrageous melodrama of Chicago mobsters and shadowy government agencies with the ordinary mysteries of family dynamics.... Readers will emerge from the fray sure they know each Telemachus down to the smudges on their hearts. A skillfully written family drama that employs quirk and magic with grace." ( Kirkus Reviews)
" Spoonbenders is brilliant. With the Telemachus clan, Daryl Gregory has created a family that is part J.D. Salinger and part David Foster Wallace. But the most impressive trick in the novel isn't how they read minds. Gregory's real gift is how he uses them to show the depths of the human heart." (Christopher Farnsworth, author of Killfile and Blood Oath)

Really well put together story. Interesting, thrilling and with a lot of heart - great narration as well.