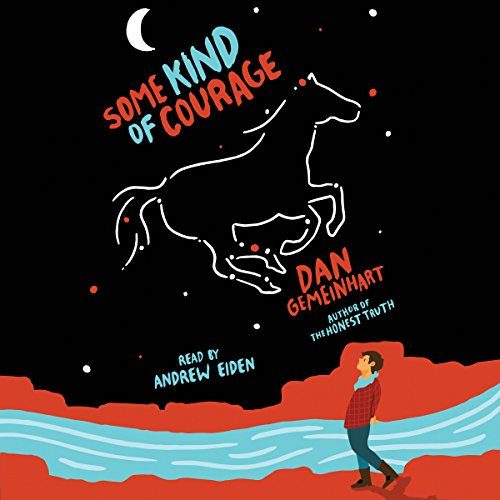 Some Kind of Courage

Saddle up for a life-defining, death-defying adventure.

Joseph Johnson has lost just about everyone he's ever loved. He lost his pa in an accident. He lost his ma and his little sister to sickness. And now he's lost his pony - fast, fierce, beautiful Sarah, taken away by a man who had no right to take her. Joseph can sure enough get her back, though. The odds are stacked against him, but he isn't about to give up. He will face down deadly animals, dangerous men, and the fury of nature itself on his quest to be reunited with the only family he has left. Because Joseph Johnson may have lost just about everything, but he hasn't lost hope. And he hasn't lost the fire in his belly that says he's getting his Sarah back - no matter what.

The critically acclaimed author of The Honest Truth returns with a poignant, hopeful, and action-packed story about hearts that won't be tamed...and spirits that refuse to be broken.

"Narrator Andrew Eiden deftly captures the colorful vernacular of Washington State in the 1890s. His Western twang gives authenticity to 12-year-old Joseph.... This story is full of emotion, adventure, and a strong sense of time and place." (AudioFile)