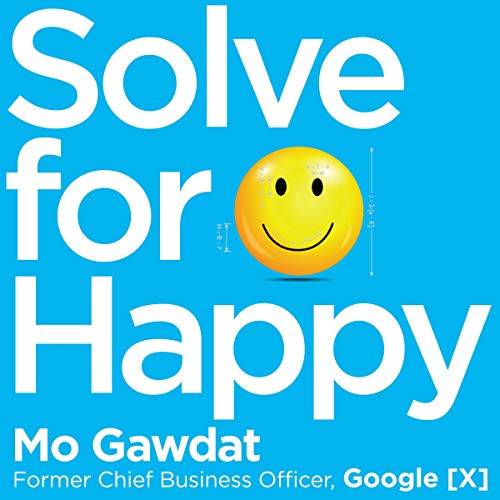 Solve for Happy is a startlingly original book about creating and maintaining happiness, written by a top Google executive with an engineer's training and fondness for thoroughly analyzing a problem.

In 2004 Mo Gawdat, a remarkable thinker whose gifts had landed him top positions in half a dozen companies and who - in his spare time - had created significant wealth, realized that he was desperately unhappy. A lifelong learner, he attacked the problem as an engineer would, examining all the provable facts and scrupulously following logic. When he was finished, he had discovered the equation for enduring happiness.

Ten years later that research saved him from despair when his college-age son, Ali - also intellectually gifted - died during routine surgery. In dealing with the loss, Mo found his mission: he would pull off the type of moonshot that he and his Google [X] colleagues were always aiming for - he would help 10 million people become happier by pouring his happiness principles into a book and spreading its message around the world.

One of Solve for Happy's key premises is that happiness is a default state. If we shape expectations to acknowledge the full range of possible events, unhappiness is on its way to being defeated. To steer clear of unhappiness traps, we must dispel the six illusions that cloud our thinking (e.g., the illusion of time, of control, and of fear); overcome the brain's seven deadly defects (e.g., the tendency to exaggerate, label, and filter); and embrace five ultimate truths (e.g., change is real, now is real, unconditional love is real).

By means of several highly original thought experiments, Mo helps listeners find enduring contentment by questioning some of the most fundamental aspects of their existence.

PLEASE NOTE: When you purchase this title, the accompanying photographs will be available in your My Library section along with the audio.

I would read it again and again in order to remember the important information Mo Gawdat gives us. This book is mind-blowing. It gives us facts but is also very emotional and Mo Gawdat is a wise, funny, intelligent person who interweaves his personal story of losing his son Ali with scientific research, never losing the focus on what is really important in life.

I loved the way Mo Gawdat teaches us the essential lessons of life, what is really important or should be important to us and that most problems are just mind-based and constructed by ourselves and our education etc. I loved the powerful message and that he is such a strong man writing such a powerful and useful book although the worst thing in the world, losing a loved one, happened to him. If you are interested in these topics, this book is a MUST READ and it has the power to change you!

I cried so much after chapter 14 in which he tells us why giving is the only way of receiving, why we even should give to people we don't like and that everything comes back. So powerful and wise....if everyone behaved like that, the world would be a happy place and paradise on earth...

Everyone should read this book, I highly recommend it. It's worth the money and even more..it's a gift and I am grateful to have found it and listened to it. Thank you so much, Mo Gawdat...!

I found the book and the views of Mo very inspiring and now I am curious to know more about what makes us really happy.
It's especially interesting to hear such viewd from a person who is aktually an engineer and not a person with a degree in psychology.

I am starting now to be even more self reflecting.

The book is well read by Mo. you can feel the emotion in his voice. The message is expressed well, and some good new ways to see and do things.

i dont have the words to describe the way Mo Gawdats insights helps me everyday. thank you Mo , thank you Ali

Mo had made an masterpiece

I met Mo personally and he is truly an inspiring person. especially the explanation is so easy that everything is quite easy to understand. thanks

Very touching- excellent reflection of some facts of life

Many people - same as I - do know all the facts and all truth described in the book already. Hardly anybody though is going through life as if he payed any attention to those facts. Mo’s conclusions have worked as an eye opener for me. There is a lot of striking logic to many of his thoughts. It made me rethink my life too. I love his approach.