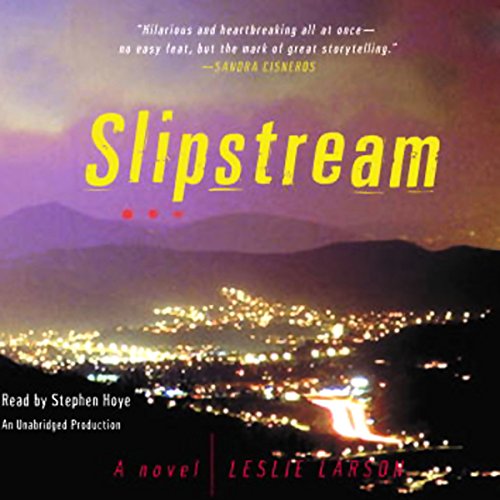 In Slipstream, Leslie Larson traces the intertwining paths of five characters as each struggles to stay afloat in the face of major setbacks, minor failures, and a reckless pursuit of elusive second chances. When Rudy loses his job cleaning jets at the airport, his sanity and his marriage threaten to follow. While his wife, Inez, secretly saves her pennies and plots an escape, his coworker Wylie, a bartender at LAX, is about to receive the surprise of his life.

Meanwhile, Wylie’s brother, Logan, freshly released from jail, tries desperately to stay out of trouble while traipsing through a minefield of temptation. And Logan’s daughter Jewell is nursing a heart broken once by an unfaithful girlfriend and again by a father who can’t seem to stick around. Though they don’t know it, these five people are headed toward an explosive event that will have consequences for them all.

Deftly weaving suspense, humor, and revelation, Slipstream is a rich human drama with the breathless pace of a thriller and the soul of classic noir.

"Larson zooms in on these five deceptively ordinary people, showing how their lives intersect and climax in a hail of bullets." ( Publishers Weekly)