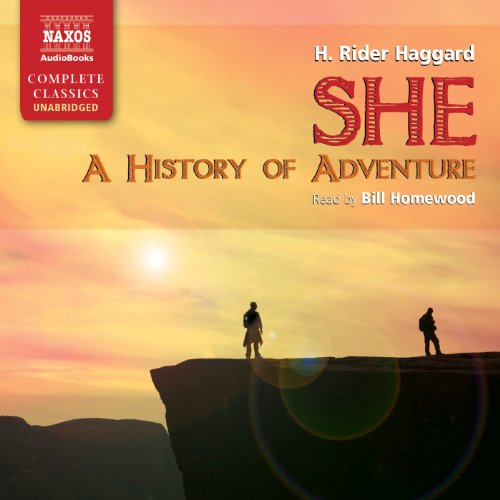 She: A History of Adventure

She: A History of Adventure

One of the classics of 19th-century imperialist literature, She tells the story of Cambridge academic Horace Holly's discovery of a lost African kingdom while on a journey with his ward, Leo Vincey. Narrator Bill Homewood has a big, sonorous voice that encompasses the scope and thrills of this adventure tale as Holly and Vincey encounter a primitive tribe of natives ruled by a mysterious white queen, the demi-goddess Ayesha, or She-who-must-be-obeyed. Along with his masterful use of tempo to create tension and suspense, Homewood lures listeners with his velvety characterization of the powerful Ayesha, evoking a sense of danger and sensuality that will leave listeners' pulses racing.

Somewhere in Africa, a tiny, primitive tribe, the Amahaggers, live secretly amongst the debris of a lost Egyptian civilization, ruled by the beautiful semi-goddess Ayesha, or She-who-must-be-obeyed. Ludwig Horace Holly, a Cambridge academic, is reluctantly drawn into plans for a voyage in search of this legendary queen. With his adopted son, Leo, he sets out on a brave journey, following a trail of clues. Shipwrecked and captured by cannibals, their voyage soon turns into a nightmare.