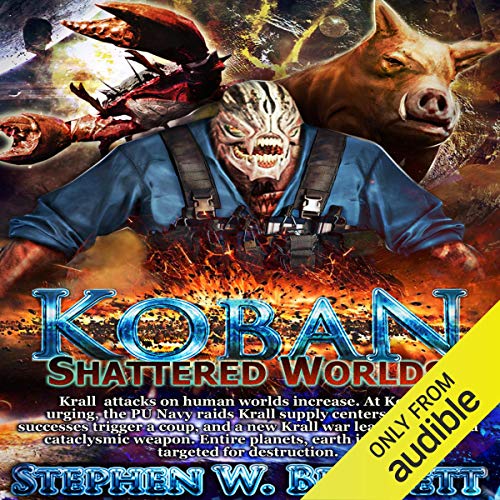 The Kobani continue their offensives against the Krall, attacking production worlds and destroying or stealing ships from the Krall fleet, which the enemy needs to resupply their invasions. The Kobani create a multispecies settlement on Haven, a gentler habitable world near deadly Koban. They gain the trust and technological assistance of freed former Krall slave species, the Torki, Prada, and resurrected Raspani. Their ranks and Mind Tap learned skills are increased by spec ops recruits from Human Space.

Mirikami engineers an assault on the Krall base world, K1, in cooperation with a skeptical human navy by sharing new technology, revealing Kobani physical capabilities, and providing intelligence on new Krall invasion plans. Despite knowing the Kobani use illegal gene mods, the navy high command decides to hit the Krall first, with the help of their secretive, tough Kobani ally. After the attack a mauled Krall fleet still heavily outnumbers the navy, and the damaged human fleet withdraws.

A vengeful Krall warlord, the Kobani old nemesis Telour, summons an ancient Olt'kitapi ship that can shatter an entire planet. He has a devious plan for remote strikes that will initiate delayed deaths on multiple human worlds, all before a ship imbued with morality can learn it has been been duped. Telour wants the home world of humanity to see death approaching one world at a time.

Mirikami expected a strong Krall reaction but not this extreme. He scrambles to head off the inexorable destruction of multiple planets. Failing to save some worlds, he is the final hope for billions of people on others. The Kobani will need the strength and speed their genes provide plus luck to save humanity.