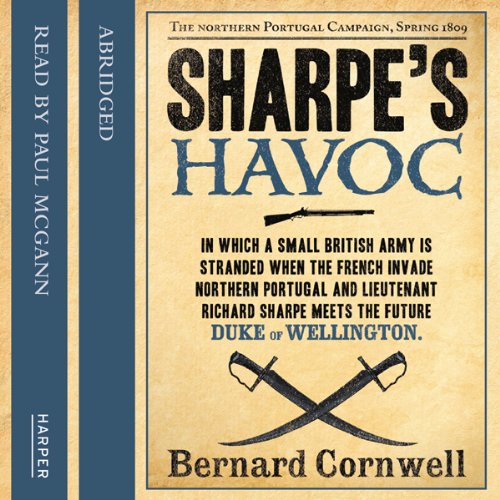 It is 1809 and Lieutenant Sharpe, who belongs to a small British army that has a precarious foothold in Portugal, is sent to look for Kate Savage, the daughter of an English wine shipper. But before he can discover the missing girl, the French onslaught on Portugal begins and the city of Oporto falls.

Sharpe is stranded behind enemy lines, but he has Patrick Harper, he has his riflemen, and he has the assistance of a young, idealistic Portuguese officer. Together, they have to find the missing girl and extricate themselves from the entanglements cast by Colonel Christopher, a mysterious Englishman who has his own ideas on how the French can be ejected from Portugal. Those ideas are as fantastic as they are dangerous, but the French are rampant, Lisbon is threatened, and Christopher sees Sharpe and his riflemen as the only obstacles to his subtle scheme.

But there is a newly arrived British commander in Lisbon, Sir Arthur Wellesley, and just when Sharpe and his men seem doomed, Sir Arthur mounts his own counter-attack, an operation that will send the French army reeling back into the northern mountains. Sharpe becomes a hunter instead of the hunted and he will exercise a dreadful revenge on the men who double-crossed him.

Sharpe's Havoc is a classic Sharpe story, a return to Portugal in the company of Sergeant Patrick Harper, Captain Hogan, and Sharpe's beloved Greenjackets.

"Cornwell is a terrific storyteller and Sharpe's adventures in and around Porto in 1809 are stirring stuff." ( Daily Telegraph)