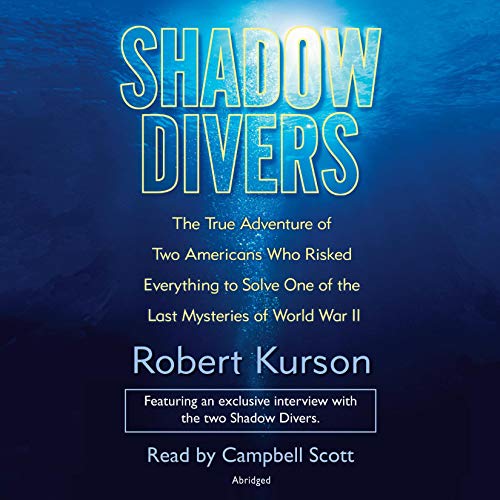 For John Chatterton and Richie Kohler, deep wreck diving was more than a sport. Testing themselves against treacherous currents, braving depths that induced hallucinatory effects, they pushed themselves to their limits and beyond, brushing against death more than once in the rusting hulks of sunken ships.

But in the fall of 1991, not even these courageous divers were prepared for what they found 230 feet below the surface, in the frigid Atlantic waters 60 miles off the coast of New Jersey: a World War II German U-boat, its ruined interior a macabre wasteland of twisted metal, tangled wires, and human bones all buried under decades of accumulated sediment.

No identifying marks were visible on the submarine or the few artifacts that Chatterton and Kohler brought to the surface. No historian, expert, or government had a clue as to which U-boat the men had found. In fact, the official records all agreed that there simply could not be a sunken U-boat and crew at that location.

Over the next six years, an elite team of divers embarked on a quest to solve the mystery. Chatterton and Kohler, at first bitter rivals, would be drawn into a friendship that deepened to an almost mystical bond of brotherhood. As the men's marriages frayed under the pressure of a shared obsession, their dives grew more daring, and each realized that he was hunting more than the identities of a lost U-boat and its nameless crew.

Author Robert Kurson's account of this quest is at once thrilling and emotionally complex. The story of Shadow Divers often seems too amazing to be true, but it all happened, 230 feet down, in the deep blue sea.

"While Kurson doesn't stint on technical detail, lovers of any sort of adventure tale will certainly absorb the author's excellent characterizations, and particularly his balance in describing the combat arm of the Third Reich. Felicitous cooperation between author and subject rings through every page of this rare insightful action narrative." ( Publishers Weekly)
"A fascinating look at the sometimes communal, sometimes bitterly competitive psychology of wreck-divers, weekend warriors in wet suits whose dangerous hobby is often an antidote to the frustrations of the workaday world." ( Booklist)
"The story told in Robert Kurson's new book features undersea thrills, a gripping mystery, incredible discoveries, true-blue friendship, life-or-death crises and history unfolding....Written with great you-are-there intensity and dynamic verve." ( The New York Times)
"From U-boat history to the mortal dangers of diving (disorientation is so common that you wonder only three men drowned on this quest), Kurson explains it all, even as he's spinning a fantastic yarn that happens to be true. All he leaves out are the boring parts." ( Newsweek)