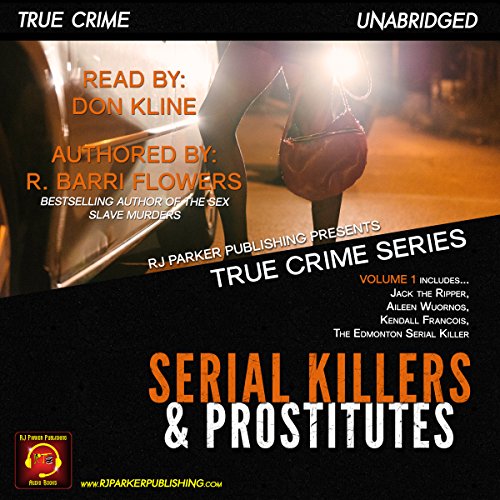 Serial Killers and Prostitutes, by award-winning criminologist and Ripperologist R. Barri Flowers, taps into the best-selling author's expertise on serial murderers and sex trade workers in offering an in-depth look at four noteworthy cases in which the two worlds collide.

Jack the Ripper, the unidentified Victorian serial killer of at least five prostitutes in the dangerous section of London, known as Whitechapel, in 1888. The Ripper, who slashed and horribly mutilated his sex worker victims, set the tone for diabolical, vicious serial slayers to follow for all time.

Aileen Wuornos was a white American prostitute, who doubled as a serial killer in murdering seven johns in Florida between 1989 and 1990. She claimed they tried to or succeeded in raping her during the course of prostituting herself. In the process, Wuornos ended up being apropos for this book as a sex worker and serial predator.

Kendall Francois was an African American serial killer, dubbed the "Poughkeepsie Killer," who strangled to death eight streetwalker prostitutes in Poughkeepsie, New York, between 1996 and 1998. Francois used his own residence as a horrifying house of homicides and burial ground.

The Edmonton Serial Killer represented one or more mostly unidentified serial killers who targeted and murdered dozens of prostitutes in the city of Edmonton in Alberta, Canada, between the mid-1970s and the early 2000s, and possibly beyond that. The sex trade worker victims were often picked up in the city's red-light district, murdered, and dumped in various killing fields in rural areas around Edmonton.