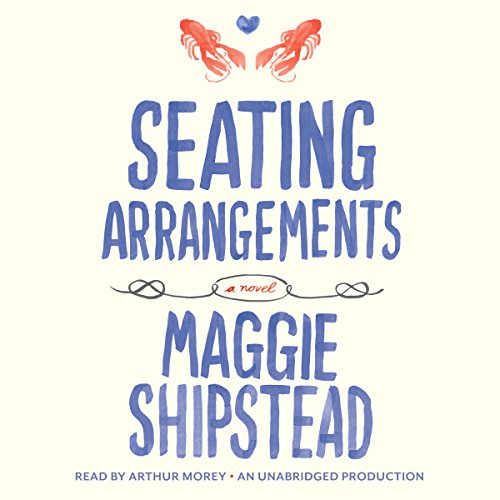 Maggie Shipstead's stunning debut novel, Seating Arrangements is an irresistible social satire that is also an unforgettable meditation on the persistence of hope, the yearning for connection, and the promise of enduring love.

Winn Van Meter is heading for his family's retreat on the pristine New England island of Waskeke. Normally a haven of calm, for the next three days this sanctuary will be overrun by tipsy revelers as Winn prepares for the marriage of his daughter Daphne to the affable young scion Greyson Duff. Winn's wife, Biddy, has planned the wedding with military precision, but arrangements are sideswept by a storm of salacious misbehavior and intractable lust: Daphne's sister, Livia, who has recently had her heart broken by Teddy Fenn, the son of her father's oldest rival, is an eager target for the seductive wiles of Greyson's best man; Winn, instead of reveling in his patriarchal duties, is tormented by his long-standing crush on Daphne's beguiling bridesmaid Agatha; and the bride and groom find themselves presiding over a spectacle of misplaced desire, marital infidelity, and monumental loss of faith in the rituals of American life.

Hilarious, keenly intelligent, and commandingly well written, Shipstead's deceptively frothy first novel is a piercing rumination on desire, love and its obligations, and the dangers of leading an inauthentic life, heralding the debut of an exciting new literary voice.

"Maggie Shipstead is an outrageously gifted writer, and her assured first novel, Seating Arrangements, is by turns hilarious and deeply moving." (Richard Russo, author of That Old Cape Magic )
" Seating Arrangements is bursting with perfectly observed characters and unforgettable scenes. This gorgeous, wise, funny, sprawling novel about family, fidelity, and social class, is the best book I've read in ages." (Courtney Sullivan, author of Maine)
"A pitch-perfect debut from a master storyteller, Seating Arrangements is a rich and deep work: a smart, consuming novel that manages also to be delightfully funny. A romp of a book, with whales and weddings and wealth, it is, at its heart, a warning against the empty seductions of status and exclusivity." (Justin Torres, author of We the Animals)