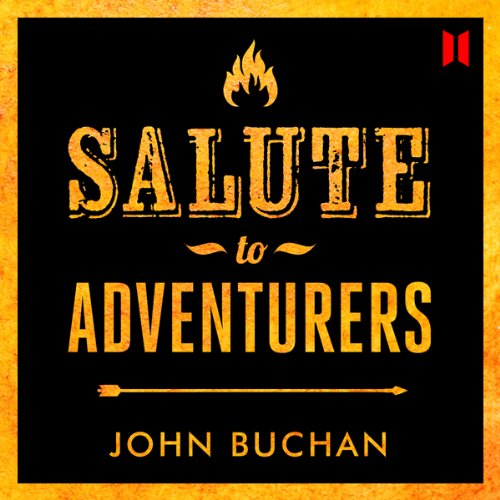 Salute to Adventurers takes place in the 1680s. It begins as the hero, Andrew Garvald, on his way to Glasgow, takes a cut across the moors. There he meets Elspeth Blair and a religious fanatic known as Muckle John Gib. Later Andrew encounters Ninian Campbell, coming to Campbell's aid when he is attacked by ruffians in a Glasgow back street.

Andrew is sent by his uncle - as his merchant representative - to Virginia, where he initially experiences hostility because of his attempts to reform trading practices. He is looked down on by "respectable society" because he is only a merchant. Among those who so regard him is a Mr Grey - who has an interest in Elspeth - who has also arrived in Virginia.

Through contact with Ninian Campbell - also in Virginia - who had promised Andrew his help should he ever find a need for it, Andrew learns of a danger threatening the people of Virginia: an anticipated Indian attack. Campbell, known locally as Red Ringan, arranges for Andrew to meet up with a man called Lawrence - exiled and living among the Indians - who tells him more of the Indian threat and seeks his help in establishing a network of contacts who will form a defence against the danger.

The story climaxes as a hazardous journey is undertaken by Andrew, Ringan, Shalah - an Indian warrior - Grey, and two others. They also later meet up with Elspeth. A stockade is set up for their protection, but Andrew and Ringan set out to bring a warning to the people of James Town. As they travel the two men are attacked by the Indians, who kill Ringan and torture Andrew. However, his fortitude under torture wins the respect of the Indians, and with the further help of Shalah - who turns out to be of the same tribe - he confronts the white man who is behind the troubles.