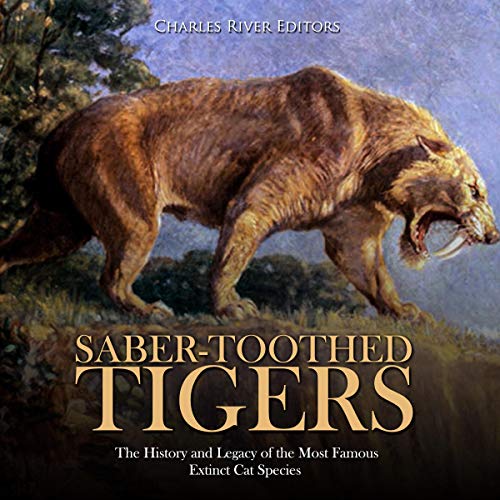 “Unrelenting angst through every fiber

Forever hanging over the precipice of defeat

It follows you: a rapacious saber-toothed tiger

It is difficult to ignore the effortless cool of a saber-toothed tiger. The fanged feline was equipped with the savage strength of a lion, the lethal stealth of a puma, the intimidating gait of a black bear, and the strapping, muscular arms of a gorilla. Amazingly, however, those traits did not stand out as much as the long, dagger-like fangs that earned the Smilodon its famous nickname. The saber-toothed tiger, legend has it, was as ferocious as it was fearless, often tackling beasts twice its size.

Saber-toothed tigers were arguably the most fabled of all the Ice Age creatures. The fearsome beast has earned itself quite the reputation, and it has been referenced to, appeared in, and inspired unique characters in endless books, films, comics, and other pop culture mediums.

For example, Marvel's Victor Creed, otherwise known as “Sabretooth”, is most known as Wolverine's nemesis, and he’s depicted as a hulking, vigorously robust menace in a red and orange-gold jumpsuit with a hunched back, a shock of wild blond hair, tiger-like claws, and frightening fangs. As that indicates, the prehistoric creature is often portrayed as impossibly cunning, unfeeling villains. Even in films geared toward children, such as the first of the Ice Age animations, the saber-toothed tigers, excluding Diego, are depicted as vicious and vindictive, lawless fiends whose sights are set on a Neanderthal toddler.

The name and reputation of the ruthless saber-toothed tiger, as enduring as it is chilling, overshadows those of its contemporaries, and the fanged feline remains a household name and one of the foremost symbols of the Ice Age to this very day.

So, what is it about the Smilodon that has captured - and continues to capture - the fears, morbid curiosities, hearts, minds, and imaginations of Holocene humans after all this time? And exactly how accurate is the general public's perception and understanding of the saber-toothed tiger? Moreover, if these saber-toothed beasts were indeed as merciless and indomitable as they are often portrayed, what was it that snuffed them out of existence?

Saber-Toothed Tigers: The History and Legacy of the Most Famous Extinct Cat Species looks at the origins of the famous cats, the fossil finds, and theories regarding their extinction.