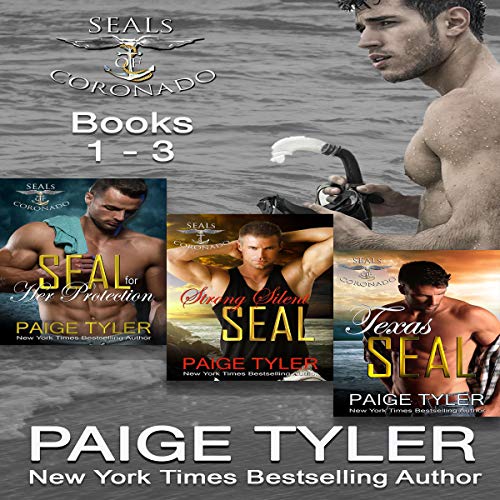 Audiobooks one to three of the SEALs of Coronado Series by New York Times best-selling author Paige Tyler are now available as a bundle!

SEAL for Her Protection

Journalist Hayley Garner thought this was the chance of a lifetime. Instead, she’s facing certain death. Taken hostage by terrorists, she knows she won’t live to see the sun rise. That is until a Navy SEAL charges in to save her.

Tall, dark, and handsome, he disappears before she can even thank him. But when her new story lands her at the Navy Training Facility, Hayley finds her sexy-as-sin SEAL. Even better, he asks her out.

But not everything is going her way. Someone is after Hayley again. And the danger is as real as her feelings for Chasen. When Hayley is kidnapped, Chasen will turn San Diego inside out to find her. But will it be too late?

Wedding planner Felicia Bradford doesn’t know pistols from pasta, but she’s learning fast. When Russian operatives kidnap her sister, they demand one thing from Felicia: steal the top secret information they want or her sister dies. But when she attempts to force a Navy SEAL to help her, Felicia gets a lot more than she bargained for.

Trusting this hotter-than-hell petty officer to rescue her sister is one thing. Trusting him with her heart is another.

She was searching for her brother...and found love along the way.

Lyla Torres' brother has disappeared. Desperate, she needs help, and who better than the one guy who always had her brother’s back in high school? Trent...and since Trent is now a Navy SEAL, he’s got to be man enough for the job - exactly who she needs. And if she’s honest, exactly who she's always wanted.

There are some authors you can't read too many books of in one go, you need different styles in between or the one author's books will start going on your nerves. However, this isn't one of them. I listened to all 3 books in one go and enjoyed each one greatly. Characters, storylines and action all vary but they are all interlinked throughout. It's a brilliant series and it doesn't get old. as for me, I'm going to search the store for book number 4 now and snuggle under the sheets with yet another hot SEAL!