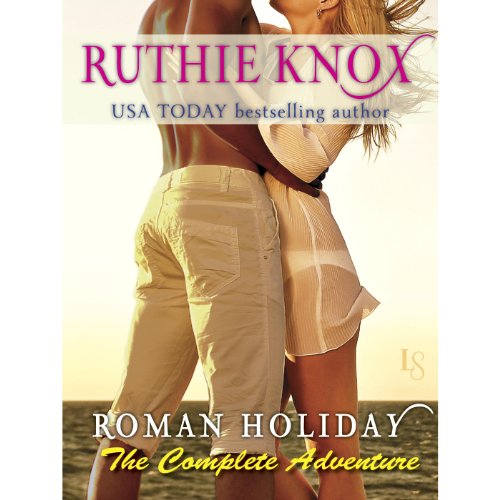 The wait is over with this bundle that includes all 10 episodes of Ruthie Knox's steamy, irresistible serial, Roman Holiday. Like all the greatest road trips, Ashley and Roman's journey is full of unforgettable twists and turns. But what's their final destination

Ashley Bowman has always been impetuous, but even she is a little shocked when she chains herself to a palm tree in the Florida Keys hours before a hurricane is due to blow in. It's all with the hope of saving her childhood home from a heartless Miami developer. But the moment she meets Roman Díaz, she realizes he does have a heart - it's just encased in ice. Ashley's determined to get Roman to crack…even if she has to drag him all over the eastern seaboard to do it.

Roman can hardly believe he's been talked into driving across the country with this brazen wild child in a skimpy bikini. He tells himself he had no choice - Ashley insists he meets the elderly snowbirds whose community will be displaced by his career-making development deal. But in truth he knows that there's something about Ashley that makes him want to get a little wild himself…and the closer they get, the more tempted he becomes.

"A great new voice in contemporary romance…hilarious, heartfelt, and hot." ( New York Times and USA Today bestselling author Kristan Higgins)
"Knox writes incredible romance." (RT Book Reviews)
"I'll read anything by Ruthie Knox - her books are always sexy, funny, beautifully poignant, and honest." (Molly O'Keefe, bestselling author of Crazy Thing Called Love)
"One of the reasons I so like [Ruthie Knox's] work is because [her] heroines are women I personally can relate to." ( Dear Author)