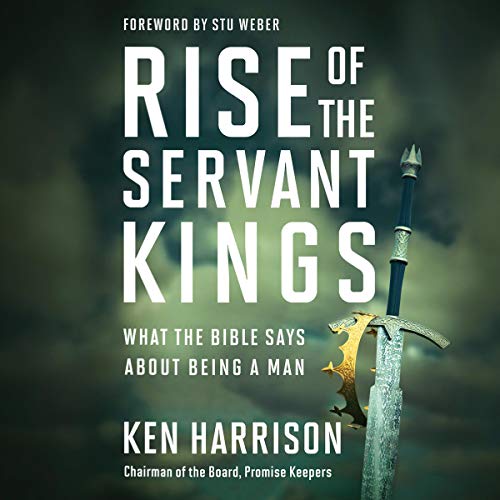 Rise of the Servant Kings

The blueprint for becoming the man you were made to be - in marriage, family, work, friendships, with God in all of life.

“If you want a no-nonsense guide to getting manhood right, this is it.” (Evander Holyfield, four-time world heavyweight champion)

Guys often approach life like it’s a pickup football game. They make up the rules as they go. They are sloppy rather than disciplined. Many lose interest and simply watch from the sidelines. Yet a man who knows who he was made to be and what he’s pursuing is a powerful force indeed. In Rise of the Servant Kings, Ken Harrison, the chairman of Promise Keepers and a former Los Angeles police officer, gives men the keys to success and gets them into the battle. He explains what we’re fighting for and the path that will lead to victory by reinforcing the importance of holiness, humility, courage, generosity, masculinity, marriage, parenting, prayer, and more. Through scriptures, stories, and an energizing discussion guide, Harrison helps men remember what matters, defeat the Enemy, and pursue their God-given goals with intensity and passion.

God’s plan for you as a man is bigger than you’ve dared to imagine. Stop settling for simply getting by and prepare to rise up as a servant king in every area of life.

“I have passed the Promise Keepers baton to Ken Harrison with exceeding joy because Ken is a man of the Word and a man of prayer. Never has there been a greater need for men of the Word and prayer because men lead based on who they are. Additionally, Ken has a genuine love for brothers of color and is committed to ensure they are reached, included, and fully involved as Promise Keepers builds an army of godly men. Read this book; it was written by a man of integrity.” (Bill McCartney, founder of Promise Keepers and former head football coach at the University of Colorado)

“No one will ever accuse Ken Harrison, a gritty ex-policeman who now heads Promise Keepers, of pulling any punches in describing the role of a servant king. His message is clear, direct, and on target as he challenges men to accept their responsibility as Christ followers in all arenas of life. Men of all ages will be encouraged by this timely reminder of both the cost and opportunity of authentic manhood.” (Mark Batterson, New York Times best-selling author of The Circle Maker and lead pastor of National Community Church)

“In Rise of the Servant Kings, Ken Harrison explains clearly what the core qualities of a man of God should be. Since Ken is an ex-police officer, he is not afraid to get right to the nitty-gritty in describing how a man can apply the Bible’s principles for authentic masculinity in every area of life - from personal integrity to marriage to fatherhood to serving his fellow man. If you want a no-nonsense guide to getting manhood right, this is it.” (Evander Holyfield, four-time world heavyweight champion)