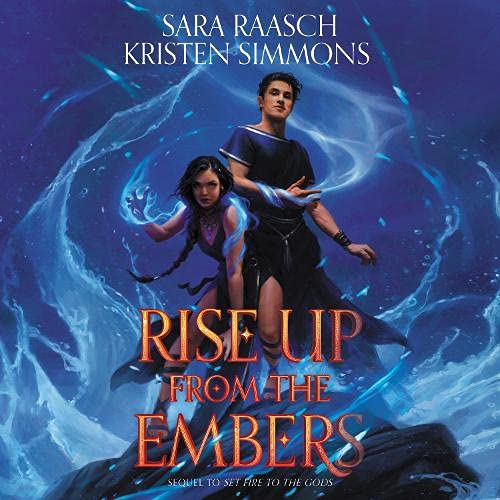 Rise Up from the Embers

Avatar: The Last Airbender meets Gladiator in this epic duology conclusion about two elemental gladiators swept up in an ancient war between immortals and humans - from Sara Raasch, the New York Times best-selling author of the Snow Like Ashes series, and Kristen Simmons, acclaimed author of Pacifica and The Deceivers. Perfect for fans of An Ember in the Ashes, And I Darken, and The Winner’s Curse.

Two gods are dead. The Mother Goddess has returned. War is rising.

Fleeing the ruins of Deimos, Ash and Madoc sail across the ocean toward their only possible allies: the water and plant gods. But when Anathrasa attacks on the way, Ash leaps to the defense - by using a power she didn’t know she had.

When Madoc made the fire and earth gods mortal, he inadvertently transferred their magic to Ash. Now, if Ash can get energeias from the other four gods, she will be powerful enough to end Anathrasa once and for all.

But not all the gods want the Mother Goddess defeated. To stop her, Madoc will have to become the obedient son his mother always wanted, and Ash will have to take a merciless place among the gods.

To defeat an immortal, Ash and Madoc must fight like gods - even if it means sacrificing their humanity.

Das sagen andere Hörer zu Rise Up from the Embers