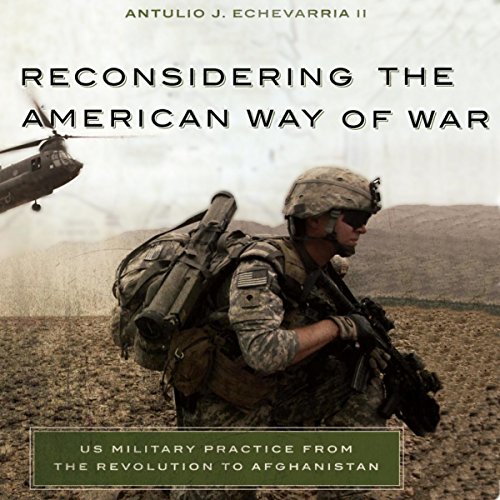 Reconsidering the American Way of War

Reconsidering the American Way of War

This audiobook challenges several longstanding notions about the American way of war. It examines US military practice (strategic and operational) from the War of Independence to the campaigns in Iraq and Afghanistan to determine what patterns, if any, existed in the way Americans have used military force. Echevarria surveys all major US wars and most every small conflict in the country's military history. He argues that the popular notion that the American way of war is astrategic, apolitical, and obsessed with using overwhelming force is wrong. Rather, America's decisions to go to war and strategies in war have throughout history been shaped by political considerations, with both negative and positive results, and the amount of force employed was rarely overwhelming or decisive. Echevarria closes the gap between histories of strategic theory and the popular battle and campaign narratives that comprise the bulk of US military history. This book hopes to force a reexmination of the true characteristics of the American way of war with an eye toward implications for the future.

"…a must-read for military officers, politicians, academics - and pundits - who all too often ignore the inherently pragmatic nature of the American approach to war..." (David E. Johnson, director, chief of staff of the Army Strategic Studies Group)
“"his book is both the best analysis of the American way of war debate and a provocative historical interpretation of how the US has waged war. An essential contribution to one of the most significant issues in current US military policy." (Brian McAllister Linn, Ralph R. Thomas Professor of Liberal Arts, Texas A&M University)