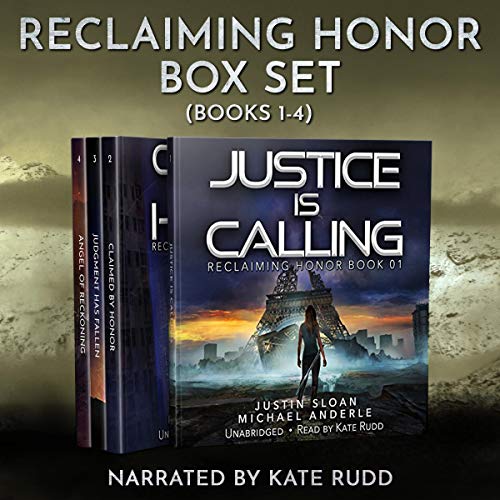 The history of the world wasn't what Valerie was taught. The daughter of a vampire and sister of a devil walking, Valerie finds out she has something neither her brother nor her father possess: She has honor.

Setting off on a journey to America, she finds herself stepping up to be the justice enforcer the land needs. She will fight for the oppressed. She will destroy evil.

Valerie must flee a brother who leaves her for dead. Because, if there is one thing Valerie understands, it's that justice doesn't turn the other cheek.

One hundred fifty years after a near apocalypse, the world is rebuilding. Survival has become the only rule, and justice is in short supply. Now, Justice has come calling.

The New York City-State wakes up, and their world has been shaken to its core. The enforcers have been scattered, but they aren't finished. This vampire is but a bump in their road to keeping the city-state in the hands of the CEOs.

The were's are involved; some leave, some stay, and new alliances are made and an old one broken.

However, in the end, it always comes back to heart and determination. Something that you often have to find for yourself when life beats you down, and Valerie is made of the right material to see it through.

The city has changed...but not always for the better. Some love her, some hate her, but the one thing that is causing the city problems is Valerie herself. As a lightning rod, she needs to get out of the public's eye and allow the emotions to cool without her presence. Whether she wants to or not.

Trusting her friends, she drops back to the shadows to deliver the justice Michael demands. Why? Because judgement has fallen, and even the deep, dark places are going to realize they are not safe.

For this vampire, it's time to die...a second time.

Valerie understands that to take the fight to those who are attacking in New York, she needs to leave the spotlight. Both for the city, and for herself.

Her enemies are relentless in their attacks to get to her. Since they have relocated to the Chicago City-State area, that is where she must go. Only one problem: She will be running into the militaristic force called the FDG. She'll need to either work with them or stay off their radar to take out the CEOs. She hopes.

For those who have been demanding her head, the angel of reckoning has their response, and she is coming to deliver it. Personally.