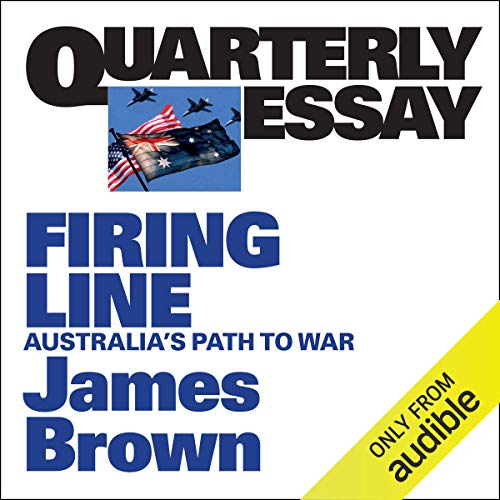 Going to war may be the gravest decision a nation and its leaders make. At the moment Australia is at war with the Islamic State. We also live in a region that has become much more volatile, as China asserts itself and America seeks to hold the line. What is it like to go to war? How do we decide to go to war? Where might we go to war in the future? Will we get that decision right?

In this vivid, urgent essay, James Brown looks to history, strategy and his own experience to explore these questions. He examines the legacy of the Iraq War and argues that it has prevented a clear view of Australia's future conflicts. He looks at how we plug into the US war machine now that American troops are based in Darwin. And he sheds fascinating light on the extraordinary concentration of war powers in the hands of the Prime Minister - and how this might go wrong. This powerful essay argues that we have not yet begun to think through the choices that may confront us in years ahead.

'When you live in a country like ours, the dirty business of war is a stranger. That is the blessed legacy of a place where soldiers are rarely seen, and then only on parade. Where war means Anzac Day, and Anzac Days are all the same. There are few moments in modern Australia when you might pause to ask the most consequential of questions...What is it that we are willing to fight for?' (James Brown, Firing Line)

James Brown is a former Australian army officer who commanded a cavalry troop in Southern Iraq, served on the Australian taskforce headquarters in Baghdad and was attached to Special Forces in Afghanistan. He now runs the Alliance 21 project at the US Studies Centre, University of Sydney. A columnist for the Saturday Paper and regular media contributor, his first book was the acclaimed Anzac's Long Shadow.