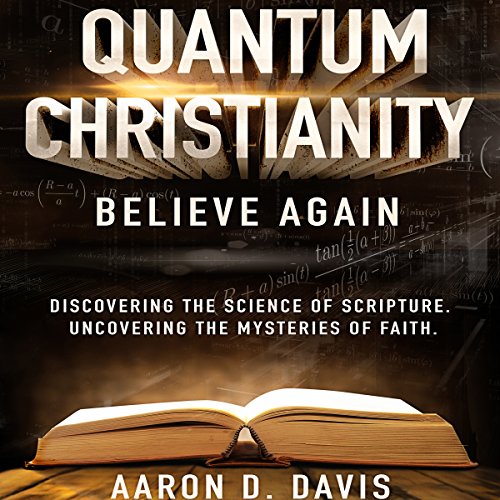 Over 2200 years ago, the Greek philosopher Epicurus (341 BC - 270 BC ) said, "Is God willing to prevent evil but not able? Then he is not omnipotent. Is he able but not willing? Then he is malevolent. Is he both able and willing? Then whence cometh evil? Is he neither able nor willing? Then why call him God?" Now some 2000 years later, many are still asking the same questions with the same conclusions as Epicurus.

Quantum Christianity: Believe Again - Discovering the Science of Scripture. Uncovering the Mysteries of Faith was written to address these hard questions and many more. Have you ever looked at life, religion, or the human condition and silently thought to yourself, "There has got to be more?" Religious resolve - from Secessionism and Agnosticism to full-blown Atheism - often has roots in a Christian upbringing, abruptly halted by unfulfilled expectations of God. Maybe you've had questions like these: If the God of the Bible is truly "God", then why are there starving children in Africa? Why, when I did everything I knew to do, did God not come through for me? How is it, if God is good, that evil so triumphs in the earth. And how does his "will" even make sense in the midst of such apparent chaos?

Many times, the perceived inconsistency between what we have been taught and what we have experienced is the catalyst for diminished faith, if not a loss of faith altogether. But what if what you have been told and have accepted as truth is only a partial truth? Or what if what you have ultimately rejected as a faith fairytale was based upon incomplete information? What if, in that faith-defining moment when your heart cried out "there has got to be more", you were right, and there actually is an answer?

By discovering the science of scripture and uncovering the mysteries of faith, Quantum Christianity provides a deeper look into what we believe, why we believe it, and the surprising answers that await us when we blend science and faith.