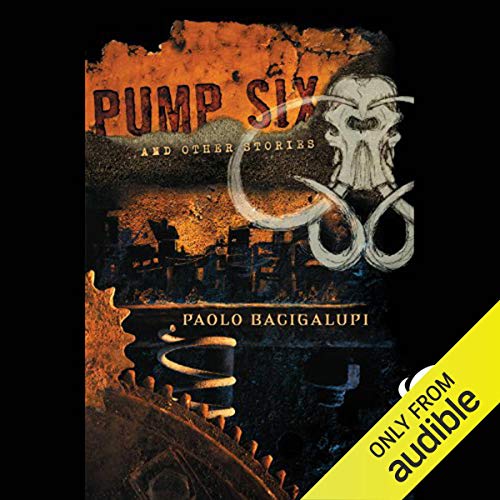 Pump Six and Other Stories

Paolo Bacigalupi is fresh off of a Nebula Award win for his first novel, The Windup Girl, and his teen novel Ship Breaker is getting rave reviews. Now we're treated to some of Bacigalupi's earlier work in the form of Pump Six and Other Stories, a collection of short stories that will certainly feel familiar to those who love the dystopian settings of his longer works. The collection is narrated by a carefully matched set of three fine actors — James Chen, Eileen Stevens, and Jonathan Davis — who share a natural reading style that brings the storyteller's art to the tale.

The collection opens strong with "Pocketful of Dharma", narrated by Chen, who plunges us easily into the world of future China. A tale of moral dilemma, self vs. selflessness, and uploaded consciousness, "Pocketful of Dharma" is a satisfying and comparatively light story. It serves as a good introduction to the Eastern flavor of two stories found later in the collection, "The Calorie Man" and "The Yellow Card Man", both set in the world of The Windup Girl. "The Yellow Card Man" in particular seems to be almost a prototype of the novel.

The strongest pieces in the collection may be the ones furthest from Bacigalupi's Windup milieu. "The Fluted Girl" is set in a decadent future of fiefdoms, where fame is the only currency that matters to the wealthy, and their subjects are victims of their masters' aspirations — and their perversions. Stevens ranges easily between the vulnerable Lidia — suspended in an eternal pre-adolescence — and her cold, ambitious mistress. The author's vivid world and the complicated, horrifying relationship between possessor and possessed come together in a story that the listener will find hard to forget.

In "The People of Sand and Slag" three nearly indestructible post-human friends discover a dog in the wasteland: fragile, mortal, needy, expensive, and the only one of its kind. Bacigalupi paints an original far-future landscape and peoples it with believable, relatable characters, voiced with the authenticity that Chen brings to all of his performances.

Narrator Jonathan Davis never disappoints in anything he does, but his true gift is dialog. In "Pop Squad" — a story in which people live forever and babies are vermin to be exterminated — Davis' talent brings each character to life, including the rebellious woman who dares to have a baby hidden away from the world and the population enforcers.

The weak link comes near the middle of the book. "The Pasho" lacks the intensity that we've come to expect from Bacigalupi, who has made a name for himself by covering new ground, both in setting and in his examination of human nature. Davis' compelling reading style carries the listener for a while, but in the end "The Pasho" fails to live up to the rest of the collection.

"Pump Six and Other Stories" is a strong collection by one of the rising stars of the speculative fiction field. Fans of his other work will find tales both familiar and fresh, and the book is a good introduction to those new to Bacigalupi's brand of dystopian fiction. —Christie Yant

Paolo Bacigalupi's debut collection demonstrates the power and reach of the science-fiction short story. Social criticism, political parable, and environmental advocacy lie at the center of Paolo's work. Each of the stories herein is at once a warning and a celebration of the tragic comedy of the human experience.

The 11 stories in Pump Six represent the best of Paolo's work, including the Hugo nominee "Yellow Card Man", the Nebula-and Hugo-nominated story "The People of Sand and Slag", and the Sturgeon Award-winning story "The Calorie Man". The title story is original to this collection.

With this book, Paolo Bacigalupi takes his place alongside SF short-fiction masters Ted Chiang, Kelly Link and others, as an important young writer that directly and unabashedly tackles today's most important issues.

"Three narrators perform the works individually, bringing the stories starkly to life. James Chen adds a special touch with his Chinese accent in the performance of “Pocketful of Dharma,” an odd melding of science and religion. The readers craft their performances to wring every ounce of drama from Bacigalupi's words." ( AudioFile)

Pump Six stays one of my all time favourite shorts

Stay optimistic and keep on working, and so keep on getting a little bit better all the time!