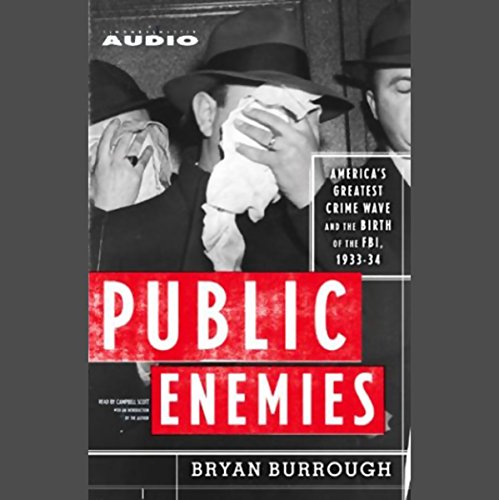 In Public Enemies, Bryan Burrough strips away a thick layer of myths put out by J. Edgar Hoover's FBI to tell the full story of the most spectacular crime wave in American history, the two-year battle between the young Hoover and an assortment of criminals who became national icons: John Dillinger, Machine Gun Kelly, Bonnie and Clyde, Baby Face Nelson, Pretty Boy Floyd, and the Barkers.

In 1933, police jurisdictions ended at state lines, the FBI was in its infancy, and fast cars and machine guns were easily available. It was a great time to be a bank robber. On hand were a motley crew of criminal masterminds, sociopaths, romantics, and cretins.

Bryan Burrough has unearthed an extraordinary amount of new material on all the major figures involved, revealing many fascinating interconnections in the vast underworld ecosystem that stretched from Texas up to Minnesota.

But the real-life connections were insignificant next to the sense of connectedness J. Edgar Hoover worked to create in the mind of the American public, using the "Great Crime Wave" to gain the position of untouchable power he would occupy for almost half a century.

"The definitive account of the 1930s crime wave....[Burrough] successfully translates years of dogged research, which included thorough review of recently disclosed FBI files, into a graceful narrative....This book compellingly brings back to life people and times distorted in the popular imagination by hagiographic bureau memoirs and Hollywood." ( Publishers Weekly)
"Fascinating..." ( The New York Times)
"A colorful history of the mobile, heavily armed, self-glamorizing desperadoes called forth by the Depression and of the government's response, organized by the rigid, brilliant, incorruptible and ultimately creepy J. Edgar Hoover." ( The New York Times Book Review)