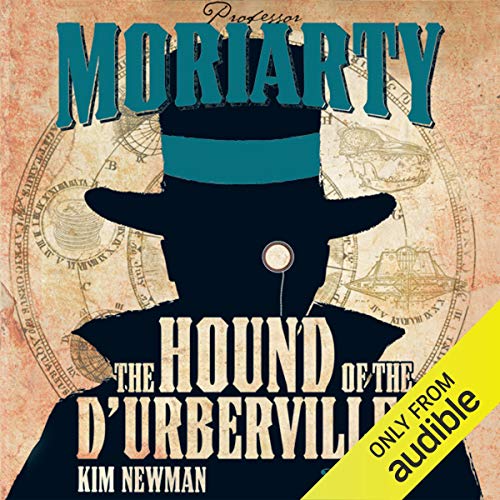 Professor Moriarty: The Hound of the D'Urbervilles

Imagine the twisted evil twins of Sherlock Holmes and Doctor Watson and you have the dangerous duo of Professor James Moriarty - wily, snake-like, fiercely intelligent, terrifyingly unpredictable - and Colonel Sebastian Basher Moran - violent, politically incorrect, debauched. Together they run London crime, owning police and criminals alike. When a certain Irene Adler turns up on their doorstep with a proposition, neither man is able to resist.

An entertaining and wickedly humorous crime adventure from the best-selling author of Anno Dracula.

"It's witty, often hilarious stuff. The author portrays the scurrilous flipside of Holmes's civil ordered world, pokes fun at 'guest stars' from contemporary novels and ventures into more outre territory than Conan Doyle even dared." ( Financial Times)
"Kim Newman has done something really audacious with Conan Doyle's criminal genius.... The notion of reinventing Moriarty and Moran as malign dopplegangers of Holmes and Watson may have been done before, but not with the firecracker exuberance that Newman brings to it." ( Independent)

a very good audio book of an amazing book. this is one of my favourite books, and the speaker absolutely does dear Basher justice. his voice for irene is a tiny bit annoying but that's irene for you. moriarty has a good voice, and the distinction between the characters is perfectly fine.