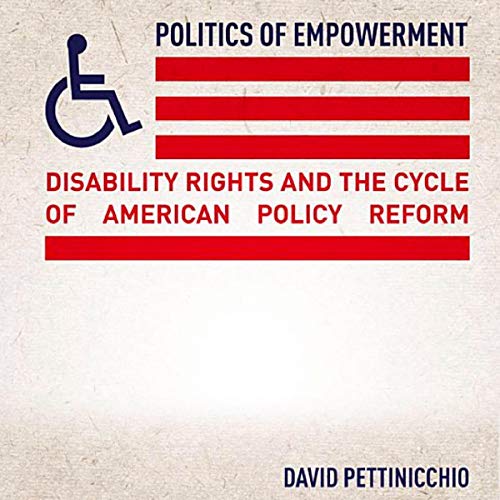 Politics of Empowerment: Disability Rights and the Cycle of American Policy Reform

Despite the progress of decades-old disability rights policy, including the landmark Americans with Disabilities Act, threats continue to undermine the well-being of this population. The U.S. is, thus, a policy innovator and laggard in this regard.

In Politics of Empowerment, David Pettinicchio offers a historically grounded analysis of the singular case of U.S. disability policy, countering long-held views of progress that privilege public demand as its primary driver.

By the 1970s, a group of legislators and bureaucrats came to act as "political entrepreneurs". Motivated by personal and professional commitments, they were seen as experts leading a movement within the government. But as they increasingly faced obstacles to their legislative intentions, nascent disability advocacy and protest groups took the cause to the American people forming the basis of the contemporary disability rights movement. Drawing on extensive archival material, Pettinicchio redefines the relationship between grassroots advocacy and institutional politics, revealing a cycle of progress and backlash embedded in the American political system.

"A compelling story, with lessons for advocates, policy makers, and anyone who wants to understand either group." (David S. Meyer, University of California, Irvine)

"A broad and ambitious study of the evolution of American disability policy and disability rights." (Richard K. Scotch, University of Texas at Dallas)

"A must-read for those interested in social movements and citizen participation." (Andrea Louise Campbell, MIT)